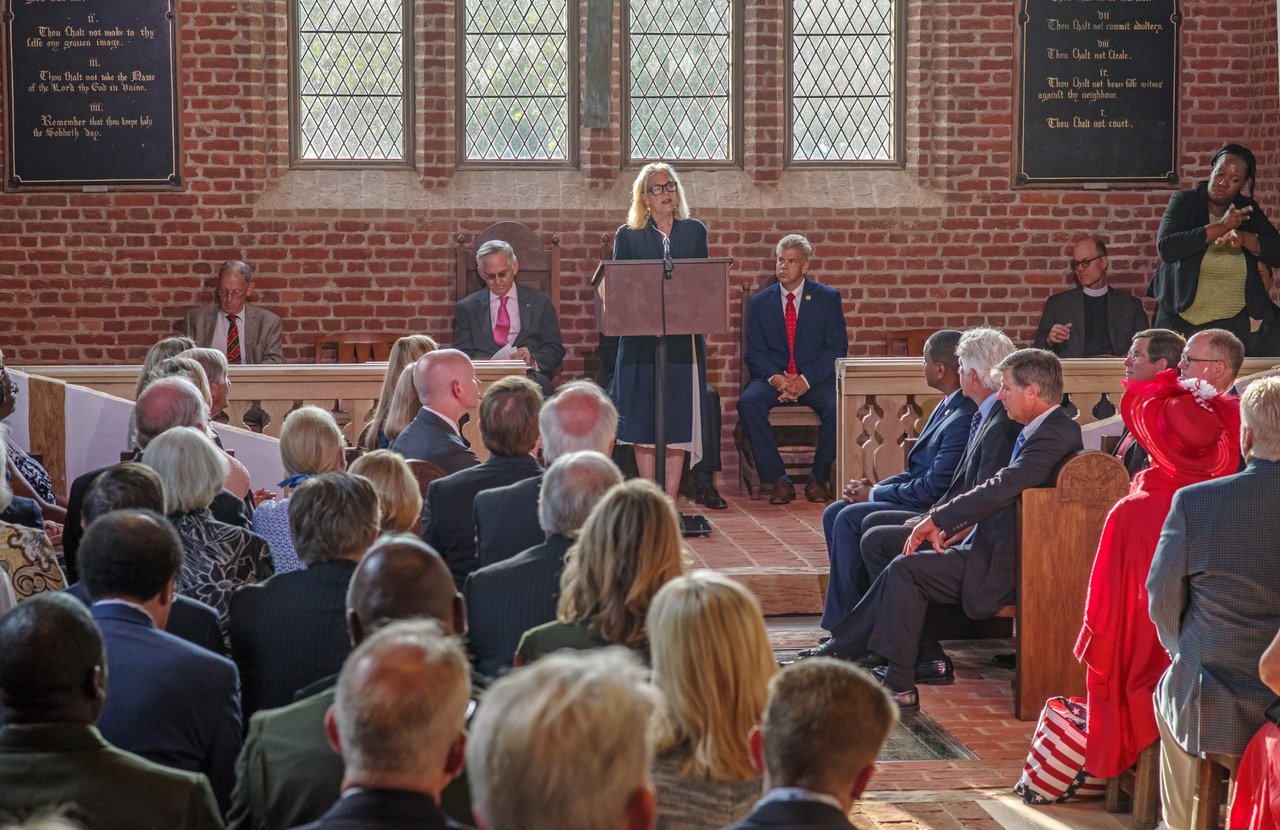 These remarks were delivered by Elizabeth S. Kostelny, Chief Executive Officer, at the 400th Anniversary of the First Representative Legislative Assembly at Jamestown Island on July 30, 2019.

Governor Northam, Speaker Cox, Senator Norment, Sir David, and to all of our distinguished guests, welcome to Historic Jamestowne.

I am Elizabeth Kostelny. I have the great honor to serve as Chief Executive Officer of Preservation Virginia.

On behalf of Preservation Virginia’s Board of Trustees and our Jamestown Rediscovery Foundation Board of Directors, I share our appreciation for friends and partners gathered today and acknowledge the leadership of Administration, General Assembly, American Evolution and Jamestown-Yorktown Foundation. Our special appreciation to our partners in managing Historic Jamestowne, the National Park Service, tribal representatives and members of descendant and family societies.

Today, we commemorate the events that occurred on this site 400 years ago. The distinguished speakers who will follow me will capture the importance of those proceedings and the direct influence still felt today. I will focus on this physical place and the persistent efforts of women who ensured its preservation.

The history embodied within these walls would have been lost if it were not for the vision and dedication of women. In 1889, Mary Jeffrey Galt and Cynthia Beverly Tucker Coleman founded the Association for the Preservation of Virginia Antiquities—now known as Preservation Virginia. Their goal was to save and restore disappearing landscapes and buildings that embodied our colonial beginnings. Successfully securing Williamsburg’s Powder Magazine and Mary Washington’s Fredericksburg home, the women established an organization which over 130 years has saved more than 500 of Virginia’s historic places. 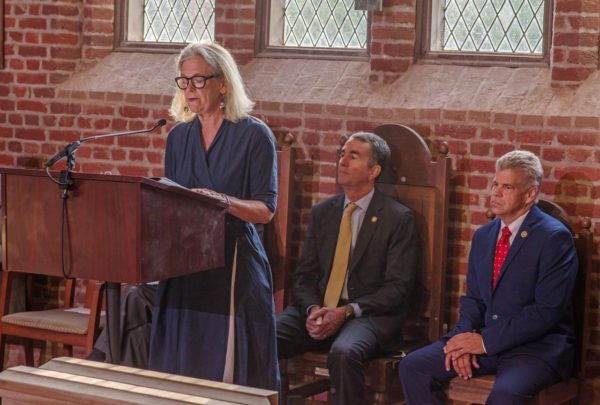 Never veering from their early ambition to acquire Jamestown, in 1893, they were successful and obtained 22 acres including the 17th-century church tower and foundations of the old churches. Within that first decade, steamships brought guests and, ever persuasive, the ladies convinced Congress to build a seawall protecting Jamestown from further erosion. Preservation Virginia founders formed alliances with the National Society of Colonial Dames, Colonial Dames of America, and the many family and descendant societies represented here—to construct this church, place monuments, markers and gates in advance of the 1907 anniversary. Connections between those organizations and this place of historic memory remain resolute.

In those early years, Miss Galt, Mary Winder Garrett, and Annie Galt launched an excavation to find the foundations where the First Assembly met. Although amateurs, their careful notes provided clues to Mary Anna Hartley, Jamestown Rediscovery senior archaeologist, who in 2016 lead only the second archaeological investigation of this church. Ms. Hartley and her team carefully peeled back the layers of concrete and brick to find evidence of the 50 x 20 foot timber-framed 1617 church and its foundations.

One evening, the team stood back in the realization that they were looking at the cobblestone footings that literally and figuratively represent the foundations of our democracy. The team unearthed the very spot where Governor Sir George Yeardley, his four councilors, and 22 burgesses met in that First Assembly that we commemorate today. The very space where we sit.

At Historic Jamestowne and in all our Preservation Virginia programs, we embrace the belief that historic places offer singular opportunities to connect present and future generations with vital lessons about all facets of our complex history. Standing where history happened offers experiences that may be sobering, inspiring, and thought-provoking. Our preservation efforts strive to capture, and not gloss over, the complexities of our history and tell the stories of the widely-known figures of John Smith, Chief Powhatan, Governor Yeardley, as well as the recently revealed stories of the unnamed Virginia Indian women who lived within the fort walls in the early years, a teenage girl we call Jane whose butchered remains speak to the brutal conditions of the deadly 1610 Winter and Angela, an Angolan woman captured and brought to Jamestown on an English ship.

With this anniversary, ongoing research and interpretation builds on the internationally recognized archaeological work initiated in 1994 by Dr. William M. Kelso and his team. Today, Dr. James Horn leads the Jamestown Rediscovery team to expand the narrative to reflect the perspectives of the Powhatan people, the English settlers and the Africans brought unwillingly to the colony. We follow their footsteps here on Jamestown Island.

The archaeological remains of this 1617 church survived through the persistence and patience of women. In 1907 at the dedication of the memorial gates, James Alston Cabell remarked on the women’s legacy, “Any work that requires sincere unselfish devotion is always best entrusted to the love and sympathy of women.”

Today, we commemorate that First Assembly in 1619 and honor all of the people – women and men—who ensured that we could stand here where the seeds of our democracy were first planted.