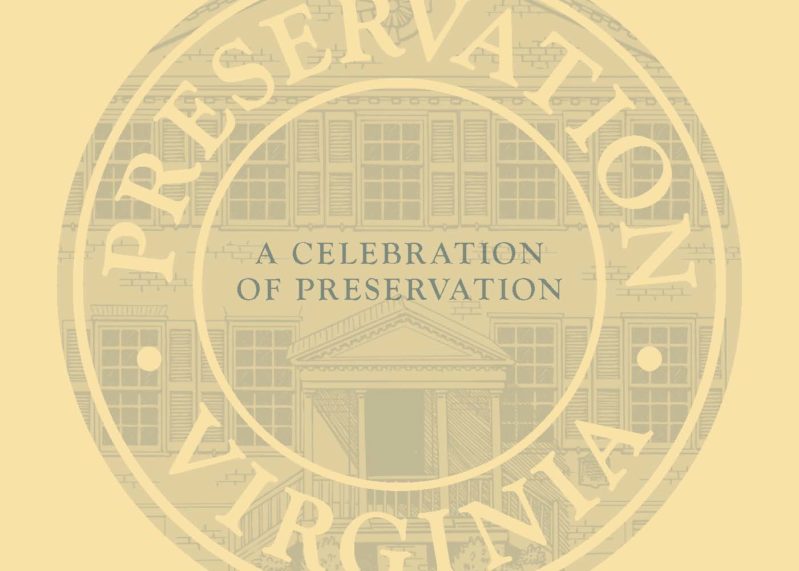 Preservation Virginia’s Historic Preservation Awards have been presented since 1971 to honor Virginians who demonstrate an outstanding commitment to preservation and raising awareness on preserving the Commonwealth’s important historic places. This year, eight awardees representing diverse projects from around the Commonwealth are being honored for their work preserving Virginia history, culture and stories.

Read on for a deep-dive into the awardees and their impactful work:

This award was established to honor excellence and commitment to the foundational goals of Preservation Virginia.  Though not given annually, the Trustee’s Award is an opportunity to acknowledge people who have embraced the transformative nature of historic preservation to strengthen communities, the Commonwealth and the nation. This year’s honoree is David M. Rubenstein for his transformational work in “patriotic philanthropy.” Mr. Rubenstein’s commitment to Virginia’s places of memory is fostering honest narratives of the many perspectives of our history and has been a catalyst for a transformation in how history is perceived by the public. Here in Virginia, Mr. Rubenstein has supported major initiatives at Monticello, Mount Vernon and Montpelier as well as Arlington House.

Check out this recent profile of Mr. Rubenstein in the New York Times.

The Gabriella Page Award, named for Preservation Virginia’s longtime past president; recognizes a property owner, architect, design firm, contractor or developer for a residential, commercial or public-sector project that best exemplifies the use of preservation standards and brings an outstanding building into appropriate and relevant contemporary use. This year two recipients received the Gabriella Page Award—Restoration Housing for Villa Heights and Selma Mansion.

Restoration Housing, headed by Executive Director Isabel Thornton, is a Roanoke-based organization that rehabilitates historic structures for reuse as affordable rental properties benefiting limited-income individuals and families. Restoration Housing restored Villa Heights, a circa 1820 house, after a decade of severe fire damage and vacancy and restored it as its first Community Impact Project. The mansion is now an important public resource in Roanoke’s Northwest community. Restoration Housing’s focus on Villa Heights reflects their mission of historic preservation with a focus on addressing the needs of limited income families and strengthening communities by reducing blight and vacancy. Read more about Isabel and Restoration Housing on their website.

Selma Mansion, a Colonial Revival mansion important to Loudoun County’s history, located in the Catoctin Rural Historic District was added to Preservation Virginia’s Most Endangered Places List in 2009 due to years of neglect and vandalism. The current owners, Sharon D. Virts and Scott F. Miller, acquired and completed a major renovation project which saved the mansion from demolition. Virginia Living wrote about the restoration in 2019.

The Katherine Glaize Rockwood Community Preservation Award recognizes an individual, group or activity that has made a significant contribution to the preservation of historic resources in Virginia. This year the award was given to Mark Reed and the Virginia Beach Historic Preservation Commission for their innovative preservation program, which includes a historic marker project, a grants program (that has helped to tell previously overlooked stories in Virginia Beach) and an elementary school education project. The Virginia Beach Commission was also instrumental in supporting and raising funds for the recent dune restoration at Cape Henry Lighthouse. Check out more on the Cape Henry Lighthouse Dune Restoration Project in the Virginian-Pilot.

The Halifax County Historical Society was given the award for its research and publication of An Architectural History of Halifax County, Virginia, a dedicated and comprehensive undertaking that produced an outstanding record of Halifax Count’s historic places, intended to inspire a renewal of stewardship of the county’s irreplaceable historic resources. The historical society logged thousands of volunteer hours surveying over four hundred properties and compiling and publishing a book that has received accolades from Richard Guy Wilson, Professor in Architectural History from the University of Virginia as well as a resolution from the Halifax County Board of Supervisors and the Halifax and South Boston Town Councils. The Gazette-Virginian wrote a recent article on the award winners in their area and the work of the Halifax County Historical Society.

EJ Scott was awarded the Louis J. Malon Outstanding Preservation Achievement Award, which recognizes an individual who inspires others by their commitment, leadership and vision for helping instill a historic preservation ethic in others. The Louis J. Malon Outstanding Preservation Achievement Award was given to Ms. Scott for her research and advocacy protecting the historic Post-Emancipation community of Carver Road in Prince William County, saving the Liberty Street African American houses in Manassas; as well as her service on the Virginia Women’s Monument Commission. The Washington Post covered the story of the Liberty Street houses and interviewed Ms. Scott.

The Young Preservationist of the Year Award:
Chloe Shelton, Roanoke

Chloe Shelton was chosen for this year’s Young Preservationist of the Year Award for her efforts to bring local history to life by writing and directing two films— Til I Come Home and Cotton Clouds— based on Roanoke’s rich history; as well as her efforts involving other young people interested in film and history.

The Young Preservationist of the Year Award recognizes a person twenty-five years of age or younger, who has made a notable contribution to preservation in Virginia. This award not only recognizes excellence, but also the profound need to attract young people to Virginia’s preservation movement. Read more about Chloe’s films in the Roanoker.