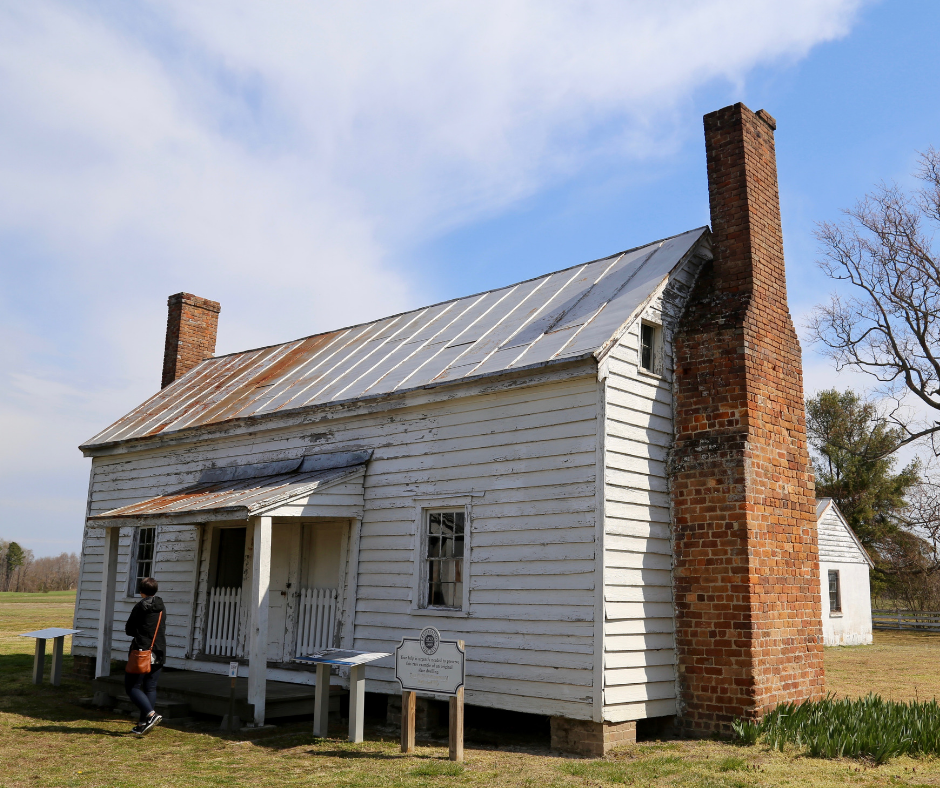 Since May of this year, I have had the pleasure of working with Preservation Virginia to study the African and African American history at Bacon’s Castle. It did not take me long to discover that this history is incredibly rich. It is filled with stories of the families that were built under enslavement, the experiences of those who risked their lives to fight against the institution of slavery, and the people who created new lives and tight family units, which grew during the Reconstruction era and into the twentieth and twenty-first centuries.

My research began with the earliest recorded accounts of slavery ownership at Bacon’s Castle, which go back to 1673, when Arthur Allen II brought six enslaved men to work on the property. These men were Simon, Emmanuel, Tony, Stephen, Mingo, and Mathew. With the names of these men, I began the work of tracing the history of the black presence at Bacon’s Castle. I started to find fascinating information about individuals like Mingo who gained his freedom sometime after 1673. He went on to marry a woman named Charity and fathered a daughter named Jane Mingo. The Mingo family line continued to expand in Norfolk and Southampton County well into the 1830s.

Between 1673 and 1774, the Allen family owned upwards of 100 enslaved people here. Many of the enslaved families of Bacon’s Castle, like that of Peter and Bess, along with their children Rose, Peter, and Sue, were subject to life-altering events such as family separations and slave sales.

The relationship between the owners Bacon’s Castle and its enslaved community changed in the nineteenth century as enslaved people from the property, as well as other parts of Surry County, became involved in acts of resistance against the institution of slavery. That involvement even extended to participation in the Nat Turner Rebellion, which took place in Southampton in August of 1831. An enslaved man from Bacon’s Castle named John, alias “John Claiborne,” was tried and convicted in the Surry County Court for having participated this rebellion – one of the nation’s most well-known slave insurrections. In October of 1831, John was sentenced to be sold South, likely to either Alabama or Mississippi.

This period of resistance culminated during the Civil War era when many fugitive enslaved people, including several of the Hankins’ runaway slaves, took up arms against the white slaveholding population of Surry County. Several of these people were responsible for liberating enslaved people from Bacon’s Castle, like Gilly and his grandchild who were freed from the property in December of 1864 by a band of armed fugitive enslaved people – one of whom, named Collier, was originally enslaved at Bacon’s Castle.

We value your community’s history and would love for you to be a part of the process of gathering more information about the black presence at Bacon’s Castle. If you are a descendant of Bacon’s Castle or a member of the community and would like to share your family’s history or your knowledge of the African American history at Bacon’s Castle, please feel free to contact me by phone at (703)-725-6447 or by email at plyoung@email.wm.edu .

Peighton L. Young is a historian who is committed to building lasting relationships with the community and making African American history more accessible to the public. Young is currently completing a Masters degree in History at Virginia Commonwealth University.