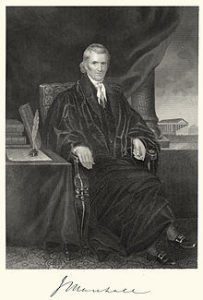 All throughout June, stop by the John Marshall House to learn how race and identity were constructed in early Federal America and the role the Marshall court played in its creation. Several court cases were brought in these years that show the evolution and change in perception of racial identity throughout this period. They include:

Angela Barnett, a free African-American living near Richmond, was attacked by two white men over her allegedly harboring an enslaved boy in 1792. Barnett murdered one of her attackers in self-defense and was initially refused a pardon by the governor, despite elite whites petitioning on her behalf. In an extremely rare act of justice, the governor granted Barnett a full pardon in 1793 due to her being pregnant with a white man’s child.

In this landmark case, members of the Pleasants family feuded over the private manumission and continued freedom of 400 enslaved individuals which would have resulted in economic losses totaling over $100,000.

Gabriel Prosser led an unsuccessful rebellion in and around Richmond in 1800. This attempted revolt was so notable because of the intricacies and massive scale of the thwarted attempt. The group was betrayed by two men before their plan to gather on the night of August 30, 1800, was thwarted by a heavy rainstorm. The conspiracy led to 27 African Americans being hanged, including Gabriel, and a newly repressive slave system.

The Antelope was the name of a ship that was found by U.S. federal authorities carrying approximately 300 enslaved Africans with the intention of selling them in the southern United States. During this period, it was illegal for U.S. citizens to be involved in the trans-Atlantic slave trade, however, slavery itself was still legal.

Want to learn more? Stop by the John Marshall House this June, Fridays through Sundays to take our special tour “Defining Race in Marshall’s Court.”