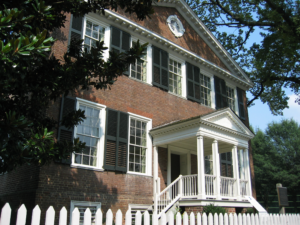 Fifty-five delegates from twelve states worked for four months to produce a draft Constitution in 1787. It satisfied no one fully. It was an elaborate system of checks and balances, separation of legislative, executive and judicial authority, and division of power between the national and state governments. Anticipating that many state legislators might be hostile to the new Constitution, the Framers provided for each state to hold special ratification conventions.

The Virginia House of Delegates called for their own convention to debate the Constitution. John Marshall was present, as well as old lion Patrick Henry. Madison, however, was not in attendance, and Governor Randolph’s address was noncommittal leaving the Federalist forces in disarray. Almost immediately the debates took a dramatic turn, threatening the Virginia fight for ratification to be lost before it began. Who was present in that mixed bag of Old Dominion politics that could keep the tide from turning and destroying the delicate balance of the Constitution?

Join us at the John Marshall House on Constitution Day, September 14th to learn about the Virginia Constitutional Convention.

Included with General Admission. Tours begin every hour on the hour.