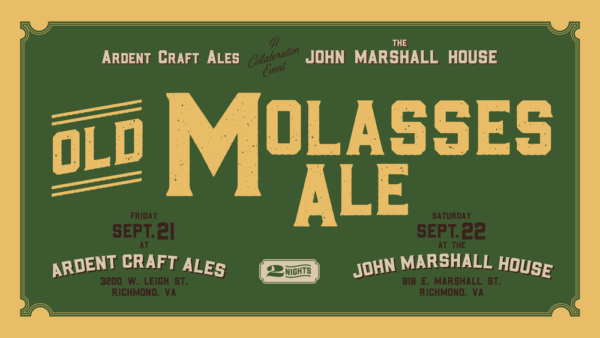 Ardent Craft Ales and the John Marshall House are teaming up for a weekend of history, science, and beer!

First, join us in the Ardent taproom at 4 p.m. on Friday, September 21, when they will introduce their latest pilot brew in honor of John Marshall’s birthday (September 24): Old Molasses Ale. This beer was based on a recipe from John Marshall’s cousin, Mary Randolph, that she brewed in the late 1700s and featured a late addition of molasses in the boil.

On Saturday, September 22, Ardent will be serving Old Molasses Ale at the John Marshall House. We will be opening up our doors for free admission to mark Time Travelers Weekend and Smithsonian Museum Day. In addition to touring the house and learning about John Marshall, keep an eye out for Angie Hilliker, associate professor of biology at the University of Richmond, demonstrating how we hope to capture yeast from bottles of Madeira that have been preserved in the cellar.

The John Marshall House will be open 10am-5pm on Saturday:

John Marshall, a Richmond native, was the longest-serving Chief Justice of the Supreme Court and is largely responsible for establishing the modern influence of the court. He was also quite fond of Madeira, a Portuguese wine that he shared enthusiastically with friends at his Richmond home.