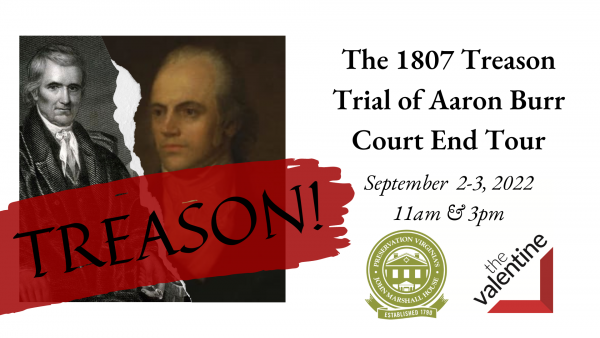 One of the first legal spectacles in America, the Treason Trial of Aaron Burr placed the focus of the nation to Richmond, Virginia, to see how Chief Justice John Marshall would decide the fate of former Vice President Aaron Burr. The Court End neighborhood is especially significant to this trial, with many of the key figures involved calling the area home. Please join Preservation Virginia’s John Marshall House & The Valentine’s Wickham House for a look at the homes of the presiding judge of the trial, John Marshall, and one of Aaron Burr’s attorneys, John Wickham, during the 215th anniversary weekend of the legal battle.

Join us for a 40-minute guided tour of each historic house on September 2nd and 3rd. Check-in and begin your dual tour at the John Marshall House–the home of the Great Chief Justice and presiding judge over the Aaron Burr trial–at your designated time. Here you’ll learn about the background of this 1807 legal spectacle, Marshall’s definition of “treason,” his tangential battle with President Thomas Jefferson, and ultimately Marshall’s decision in the trial. Following your tour of the John Marshall House, take the short walk over to the Valentine Museum to tour the Wickham House, the home of Burr’s attorney, John Wickham. In the second half of this joint anniversary tour, you will learn about the  unorthodox dinner party that took place in the home before the trial and about the broader social and political climate in Early Republic Richmond.

We recommend purchasing tickets in advance online, but walk-ins will be accepted on a first-come-first-serve basis, as spaces are limited.