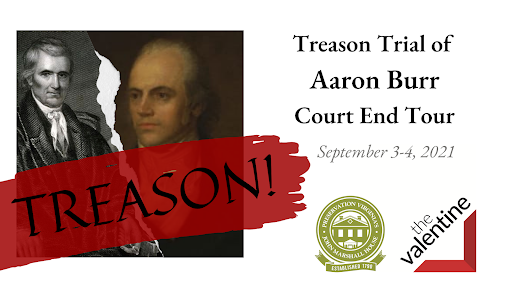 One of the first legal spectacles in America, the Treason Trial of Aaron Burr placed the focus of the nation to Richmond, Virginia, to see how Chief Justice John Marshall would decide the fate of former Vice President Aaron Burr. The Court End neighborhood is especially significant to this trial, with many of the key figures involved calling the area home. Please join Preservation Virginia’s John Marshall House & The Valentine’s Wickham House for a look at the homes of the presiding judge of the trial, John Marshall, and one of Aaron Burr’s attorneys, John Wickham, during the 214th anniversary weekend of the legal battle.

11 a.m. and 3 p.m. each day are the tour times for the joint tour with the Valentine’s Wickham House.

Email mdowney@preservationvirginia.org with questions regarding tour times and ticketing.

Preservation Virginia members use code Member10 for a 10% ticket discount.