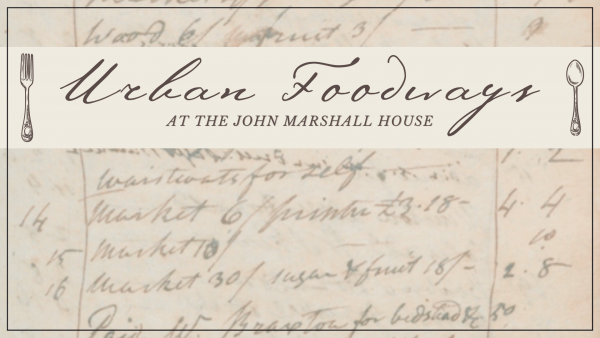 Today, Richmond, Virginia is known for and proud of its rich food history, but how far back does this tradition go? Join Preservation Virginia’s John Marshall House, the 1790 home of the Father of the Supreme Court, in an exploration of the city’s rich food history in the Early Republic.
Both enslaved and free Black hands performed the skilled labor that developed the robust cuisine famous in the American South, taking influences and ingredients from indigenous foodways, as well as French, English, and African staples. Which kinds of ingredients and techniques did the Chief Justice’s enslaved chef, Henry, utilize in meal production at the Marshall House? Apart from creating cuisine for others, what did food mean to the free Black and enslaved populations in the early United States? Finally, how have 18th and 19th century foodways contributed to the American identity?
This virtual program is free, but a suggested donation of $10 is greatly appreciated. Participants must register for this event in advance.
END_OF_DOCUMENT_TOKEN_TO_BE_REPLACED