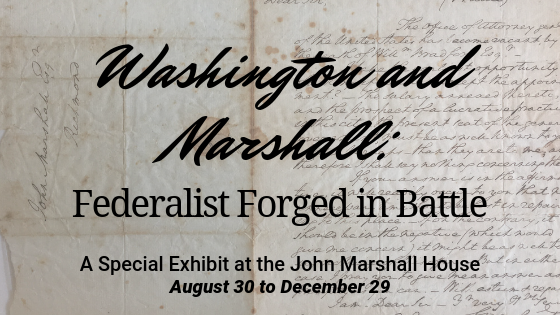 George Washington saw John Marshall as a good judge of character, often requesting his opinions of potential political appointees. In 1799, after his death, it was Marshall who eulogized Washington on the floor of the House, with Henry Lee’s refrain “first in war, first in peace, and first in the hearts of his countrymen.”

Preservation Virginia members are invited to a sneak peek of a new exhibit pertaining to the relationship between Washington and Marshall at the John Marshall House. On Thursday evening, August 29, enjoy libations and an exhibit tour with director of museum operations Jennifer Hurst-Wender. The display includes a newly conserved letter in Preservation Virginia’s collection written from Washington to Marshall in August 1795. Space is limited so reserve your spot now!

Not a member or need to renew? Join the family of Preservation Virginia supporters to attend this special exhibit preview.