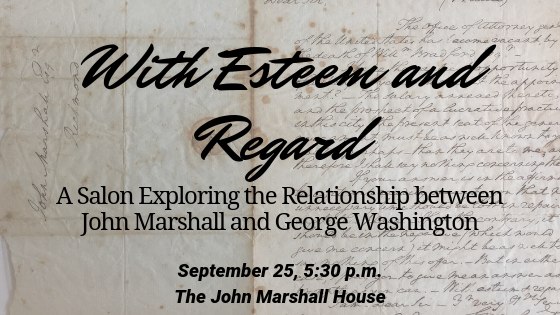 In his autobiography, John Marshall shares that the most formative experiences of his life came not in court but in battle. That was where he served under George Washington, “the greatest Man on earth,” whose example would inspire and guide him for the rest of his life. Washington returned Marshall’s esteem, asking him to be part of his administration as the Attorney General, a position Marshall declined.

In the spirit of the intimate salon gatherings of the Enlightenment, guests will have the opportunity to discuss and engage in conversation with Lynn Price, managing editor of the Washington Family Papers and meet with John Marshall himself, portrayed by Beau Robbins.

Take time to explore the newest exhibit in the Justice Gallery featuring two letters from Washington to Marshall, Marshall’s own First Edition copy of “The Life of Washington” which he authored and other objects typically not on display.

Light refreshments will be provided. A special Marshall-inspired beer by Ardent Craft Ales, the Old Molasses Ale, will be available for purchase. All proceeds go to preserve John Marshall’s robe!