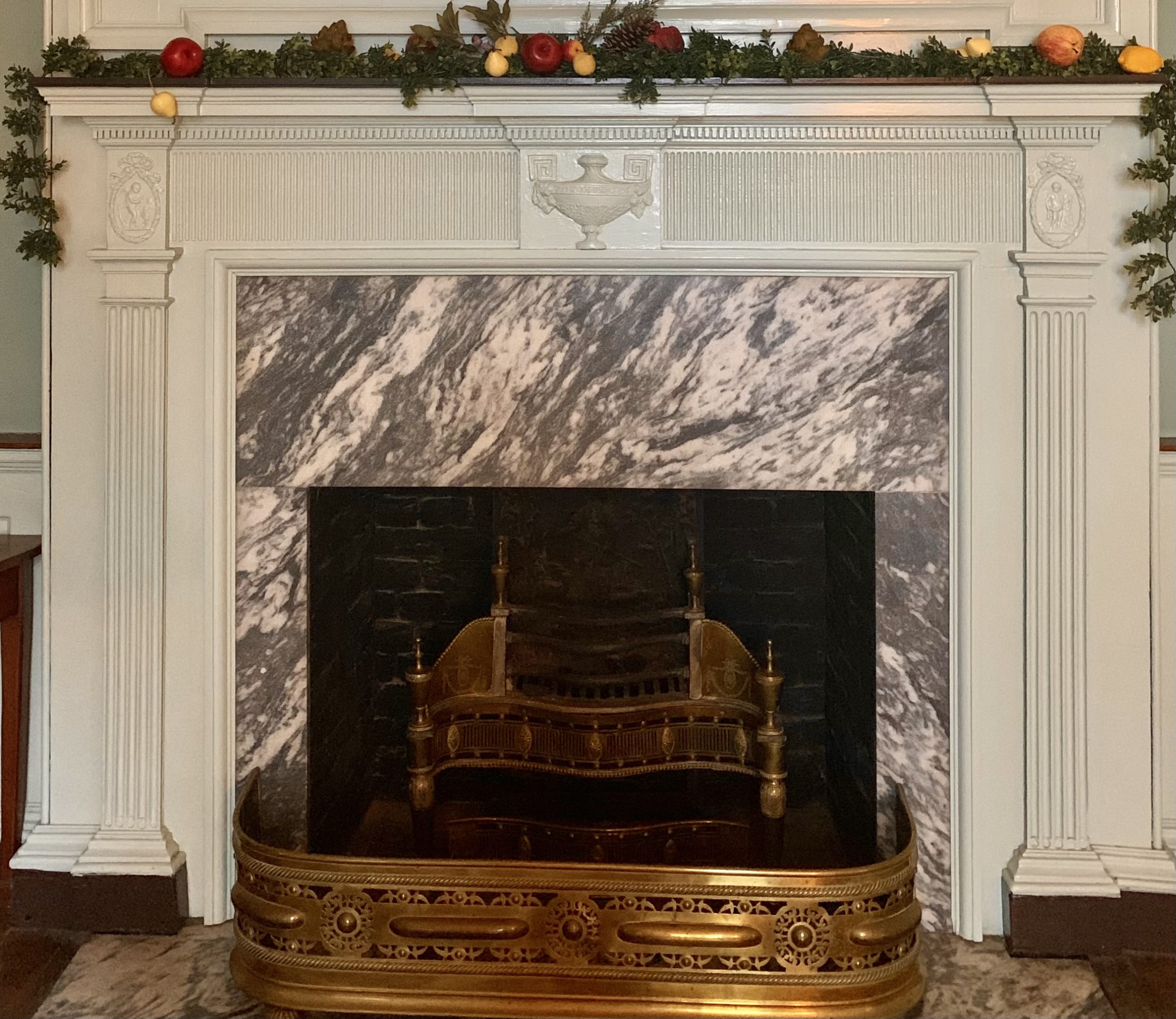 Since the holidays will look different for many families this year, let us look back and examine how Early Americans like Chief Justice John Marshall, his family, and the enslaved community who supported the household, celebrated the holiday. Which customs and traditions sound familiar to you and your family, and which have faded into obscurity?

First things first, Early Americans largely did not celebrate Christmas in the late 18th and early 19th Centuries! “Christmas” as we know it today—with indoor Christmas trees, lavish decorations, and widespread gift-giving—did not breach American society until the 1840s and 1850s. Until then, Christmas remained a religious holiday but was not recognized in the United States by most Americans. In the Early Republic—as was tradition in England and other parts of Western Europe—Christmastide, as it was known, generally lasted from December 25 through January 6, the end of Twelfth Night.

Modest holiday decoration was had. Simple evergreen and holly boughs, sprigs, and wreaths with fruit, ribbon, and candles adorned Early American mantle pieces, picture/mirror frames, and table tops. That was pretty much it! 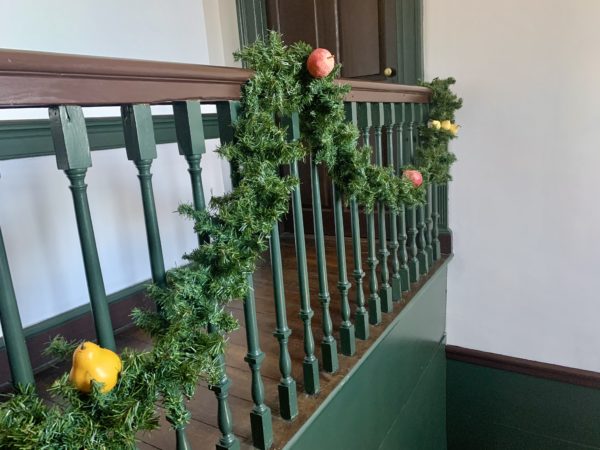 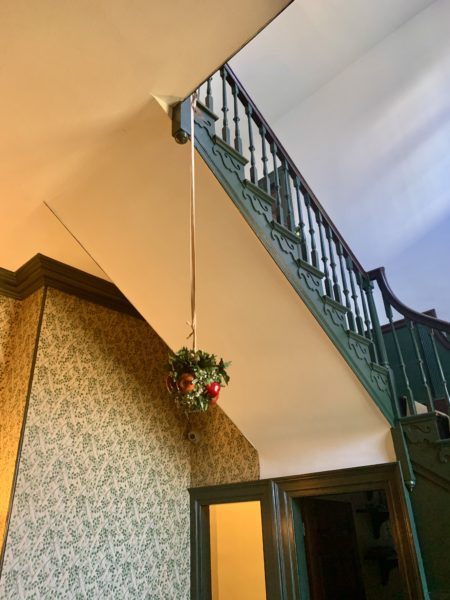 During John Marshall’s lifetime, feasting, gaming, and merrymaking came to define Christmastide celebrations. However, the Marshalls also enjoyed singing Christmas carols like “Joy to the World,” dancing, and attending plays. According to his account books, Marshall attended at least three plays around Christmastime 1792.

Still a vital component to holiday celebrations today, American families in the early 19th Century often gathered for feasts as elaborate as their station and wealth allowed to celebrate the holiday. Their feasts included meats, like turkey, ham, and roasts; and seafood dishes could also be seen. In addition: cheese, fruits, cakes, and alcohol like Madeira, in the Marshall family’s case. 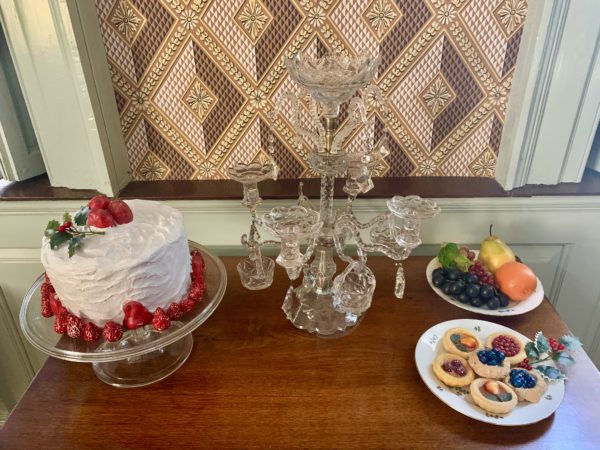 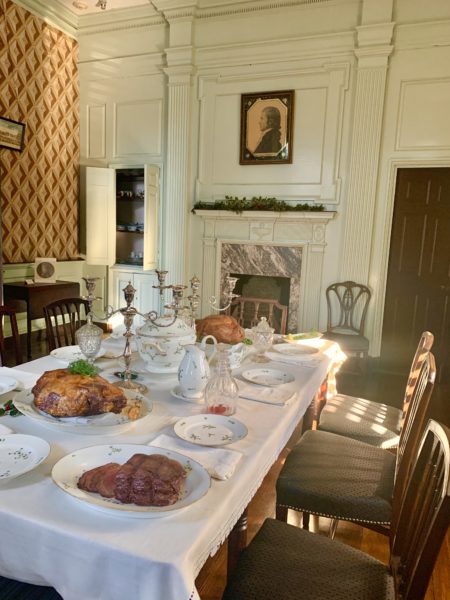 An affair for the family and guests, Christmas dinners lasted well into the night. If families like the Marshalls entertained guests for a meal during Christmastide, they’d likely gather in the early evening, enjoy a multi-course meal prepared by Henry, the Marshall’s enslaved cook and other enslaved servants, and spend the evening drinking, gambling and playing cards, singing carols, dancing, etc.

Christmas was of course a time of hope and cheer for many, but enslaved servants like those who lived and labored here at the Marshall House, found their work remained on-going throughout the holiday season. With continual entertaining and celebrations, enslaved servants like Robin, the Marshall’s butler, and Henry, their enslaved cook, found the time busier than ever. There would have been additional cooking, purchasing of supplies, cleaning of clothes, the floors, and the walls; preparing celebration China for the dining room, setting and serving at the table, and greeting guests.

Still, customarily, enslaved people received time off around Christmas to spend amongst themselves, either with family members with whom they might be in bondage, or with their fellow enslaved community. The Marshall’s enslaved several different groups of family members. In addition to Robin, John Marshall also enslaved Robin’s wife, and their three children, Robin, Agnes, and Jack. Other enslaved family members owned by John Marshall include Kate and Esau (“E-saw”); Hannah and her daughter Mary; and Daniel and his daughter Becky. Enslaved families treasured any time—during the holidays, or otherwise—that they could spend together.

While the custom of gift-giving at Christmas was rare during Marshall’s lifetime, his account books do indicate that he bought quote, “Negro clothing,” shoes, and breeches for the enslaved people living and working here, and while these items could have simply been routine purchases, they also could have been given as gifts to those like Robin, Kate, Esau, Mary, Hannah, Daniel, Becky…, etc. Additionally, gifts of special foods at Christmastide to the enslaved was also common.

While it’s unknown, specifically, how those like Nellie, Rachel, Israel, Ned, and other enslaved to the Marshalls celebrated Christmas—if at all— enslaved communities in the 18th and 19th centuries often recognized the holiday with dancing, bonfires, special foods, and singing, though only ever when their enslavers permitted it. Enslaved people could find moments of celebration and community during the holiday season, but their own merrymaking was contingent on their enslavers allowing them the time.

During his lifetime, John Marshall experienced Christmas under a variety of circumstances, including whilst serving in the Revolutionary War and encamped at the frigid and harsh Valley Forge in the winter of 1777-78; meeting his future wife, Mary “Polly” Ambler, at a ball in Yorktown, Virginia, Christmas 1780; and spent many a Christmastide thereafter with his family and friends in his Richmond house. However, Christmas 1831 proved to break John’s heart and forever tainted the joy of Christmastide in his remaining four years. On Christmas Day 1831, John’s wife Polly, of nearly fifty years, passed away. Irredeemably scarring John Marshall, he recorded the following on the first anniversary of Polly’s death on Christmas Day 1832:

“This day of joy and festivity to the whole Christian world is, to my sad heart, the anniversary of the keenest affliction which humanity can sustain. While all around is gladness, my mind dwells on the silent tomb, and cherishes the remembrance of the beloved object it contains.” – December 25th, 1832

We here at Preservation Virginia’s John Marshall House send you and your loved ones—wherever they may be—well wishes for a safe and warm holiday season, and we look forward to safely welcoming you back to the John Marshall House in 2021. In the meantime, keep up-to-date with our goings-on by staying connected with us online.