Preservation Virginia teamed up with Marc Wagner and Elizabeth Lipford from the Department of Historic Resources to visit two historic houses in King William County recently. The first house, Cherry Grove, is owned by Lee and Elaine Ramsey. When they bought the house in the 1980s, Lee said his mother questioned the purchase due to the house’s condition. Undaunted, the Ramseys proceeded to rehab and save Cherry Grove from further deterioration.

The Ramsey’s house was built in stages. The one-story section appears to have been built in the late 18th century, and the two-story section was built in the 1830s-1840s. The Ramseys have done a good bit of research on Cherry Grove, but they continue to run into roadblocks. One reason for this is most of the county records were destroyed by a fire in the clerk’s office in 1885. Only a few records and deed books survived. The Library of Virginia is a great resource for determining records lost in courthouse fires in Virginia.

Luckily, the King William Courthouse was not damaged by the fire, and is, according to the National Register of Historic Places, the best preserved of Virginia’s eleven colonial court buildings. The National Register form describes the courthouse as, “Erected in the second quarter of the 18th century, the T-shaped structure is regarded as the nation’s oldest courthouse in continuous use. Precedent for its arcaded front is the arcade connecting the wings of the first Capitol in Williamsburg. Such arcades were traditional public gathering places. Lending additional character is the Flemish bond brickwork with glazed headers and rubbed-brick corners and arches. The courthouse grounds are surrounded by a 19th-century brick wall built to keep out wandering livestock. Most of Virginia’s early colonial courthouses were located near the geographic center of their counties, unrelated to any town. King William’s courthouse followed this pattern and still preserves its rural setting.” See https://www.dhr.virginia.gov/historic-registers/050-0038/ for more information. 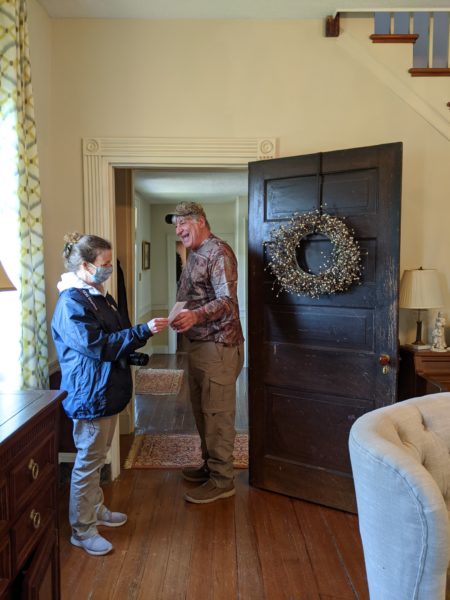 We also visited a neighbor’s house, Pleasant Green, owned by the Campbell Family. Built in the 18th century, Pleasant Green is a 2-story brick, Georgian–style house. Its Flemish brick bond, hipped roof, dentil work molding, double flue chimneys, and multi-paned windows all reflect houses built in Virginia in the 18th century. Flemish bond, which consists of alternating stretchers and headers, became standard for brickwork on many colonial buildings in Virginia by the early 18th century. 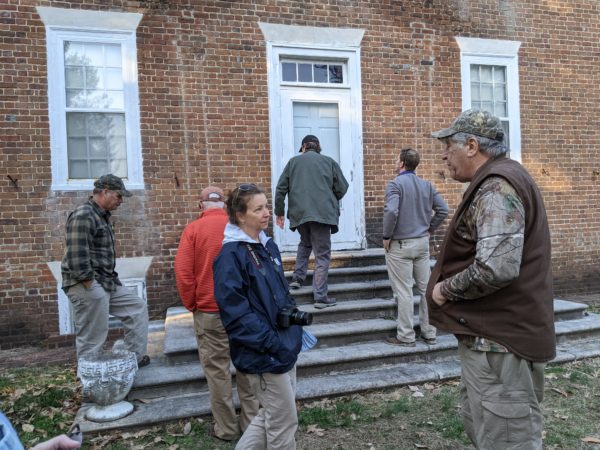 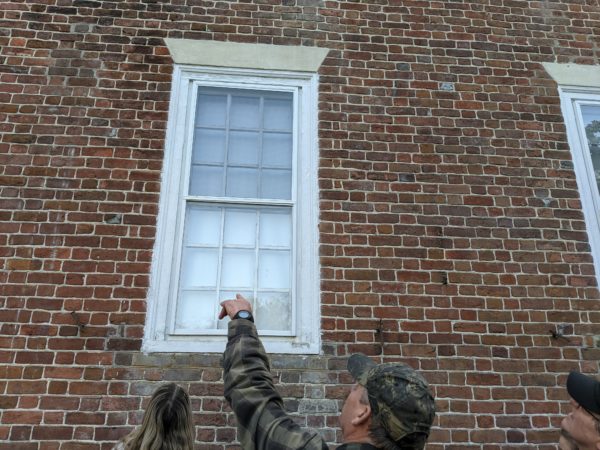