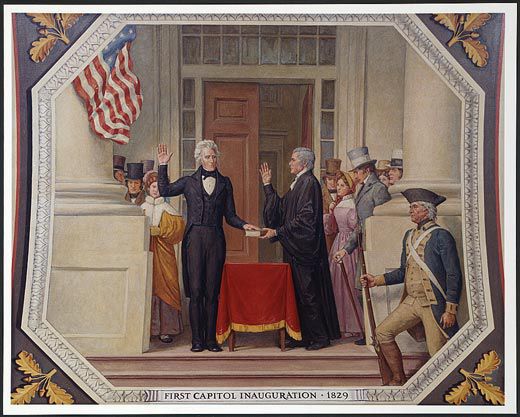 Happy Presidents Day from the John Marshall House! We love to talk about American Presidents and the relationship between the Executive and Judicial branches, so we thought we’d take a moment today to shed light on an often-overlooked aspect of Chief Justice John Marshall’s career. President John Adams is known to have once said that Marshall was the most important founding father never to have become President himself, but that does not mean that Marshall did not frequently work with the Executive. We often hear and learn about Chief Justice John Marshall’s judicial decisions on the Supreme Court and the world in which he lived that shaped those decisions, but we seldom hear of Marshall’s relationship with the American presidency and the men who occupied the office. In addition to childhood and Revolutionary era friendships with future presidents, James Monroe and James Madison, respectively, during his 50+ year career in public service, John Marshall worked in some capacity with many other American Presidents. Moreover, as Chief Justice from 1801 to 1835, John Marshall possessed the responsibility of swearing in newly elected presidents, and he had the pleasure of swearing in five different presidents on nine different occasions! With each man, Chief Justice Marshall fostered a unique rapport that likewise imprinted upon the relationship between the Judicial and Executive branches.

During his tenure as Chief Justice of the Supreme Court, John Marshall swore in the following presidents:

Beginning with Thomas Jefferson, Marshall’s role in swearing in new presidents also cemented the importance of and precedent in facilitating the peaceful transition of power, a tradition that has since formed a cornerstone of our democracy. Still, Marshall had many conflicts with Jefferson, especially in the famous case of Marbury v. Madison, the impeachment of Samuel Chase, and the Aaron Burr conspiracy trial. With James Madison’s and James Monroe’s terms, Marshall, who was famous for his ability to make friends with his political rivals, built upon the friendships he had formed in youth with Madison and especially Monroe. Political tensions also tempered down as the Democratic-Republicans took a firm control of the federal government. John Quincy Adams and John Marshall worked alongside each other with little-to-no opposition. Andrew Jackson came to be the final president that John Marshall swore into the Executive office in 1829 and 1833, and incidentally proved one of the most tumultuous relationships Marshall had with an American president. Jackson constantly fought the rulings from the Marshall Court as it was losing its influence with the rise of Jacksonian democracy. Prominent pushback from Marshall came in Worcester v. Georgia (1832), a rebuke on the state of Georgia for its seizing of Cherokee lands. Jackson refused to enforce Marshall’s decision. Despite this tense relationship, Marshall built a strong and lasting reputation that the Supreme Court has since built upon, making it widely regarded by both sides of the aisle as a coequal branch of government.