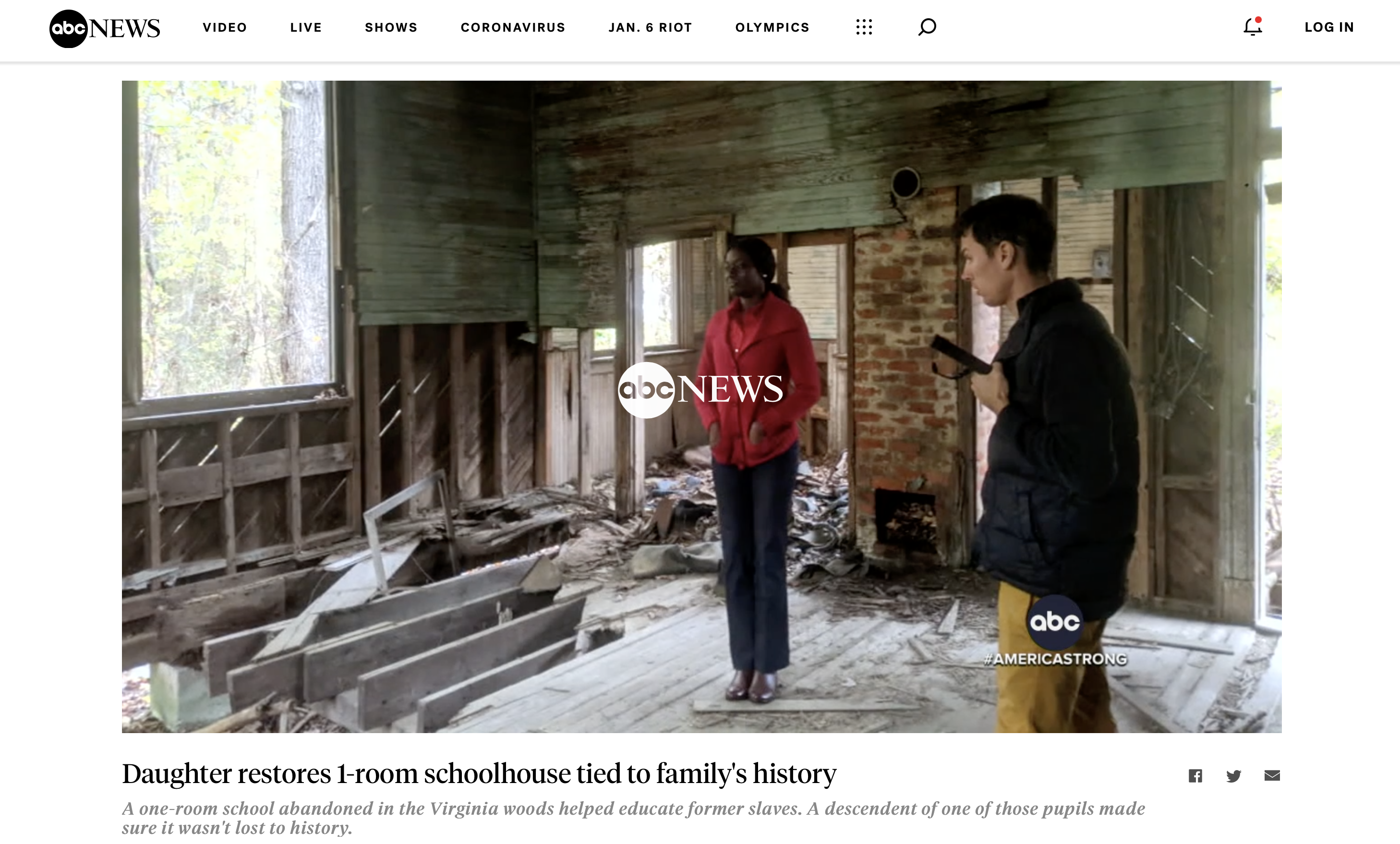 The Old Dawn School, also known as School #4, is one of a group of schools built for African American students in the late 19th-early 20th centuries in the African American Community of Duval, also known as Dawn, in southern Caroline County. The school’s decorative elements, including wide, boxed overhangs, exceptionally large windows, interior molding, and a hipped roof; reveals that it was built with abundant care and skill.

Work to preserve the school has garnered a lot of recent media attention, including a segment on Richmond CBS 6, an article in the Washington Post, and a segment on ABC World News with David Muir. The school will also be featured in an upcoming Richmond Magazine article.

The Old Dawn School likely served to educate students of the community until the 1950s-60s, when the landmark Supreme Court case Brown v. Board of Education of Topeka found that racial segregation of children in public schools was unconstitutional. The Old Dawn School was later used as a dwelling until the 1980s; but has silently stood in a wooded area of Caroline County for over 40 years.

In 2021, Kimberly Morris, whose father, Isiah Morris, attended the Old Dawn School, nominated the school to Virginia’s Most Endangered Historic Places– an annual program by Preservation Virginia to raise awareness on threatened historic places across the Commonwealth.  The nomination started Preservation Virginia’s teamwork with Kimberly Morris to preserve the school and its stories.  For more information on Virginia’s Most Endangered Historic Places list see https://preservationvirginia.org/our-work/most-endangered-historic-places/.

While the building itself is significant and of noteworthy construction, Kimberly’s research and genealogical work continues to illuminate the stories of the people who attended Old Dawn and who lived in the surrounding community, as well as how Black communities highly valued the education of their children.

Morris grew up and lives in nearby Richmond, but her roots lie in the rural African American community of Duval, or Dawn, which was established in Caroline County after Emancipation. Morris remembers visiting the area with her relatives as a child, and the sense of familiarity and belonging she always had to the community, even though she did not grow up there.

Kimberly’s research and the stories told by her relatives, maintain that the Duval/Dawn Community was established by formerly enslaved people from surrounding plantations, such as the Meadow and North Wales. Some of Morris’ ancestors were the trainers and groomers of Secretariat, one of the greatest racehorses in history, who was born and raised at the Meadow.

While built in a similar fashion to a one-room Rosenwald School, the Old Dawn School does not appear to have received funding from the Rosenwald program. Some funds to build Old Dawn School may have come from the county school offices; but in many case, resources and funding to build early Black schools came directly from the African American communities.

The Rosenwald rural school building program was a major effort conceived of by Booker T. Washington and funded by Julius Rosenwald to improve the quality of public education for African Americans in the South. Between 1917 and 1932, more than 380 Rosenwald schools were built in rural areas across Virginia, and over 5,000 were built in the United States.

The Old Dawn School is a testament that non-Rosenwald Schools are just as significant as Rosenwald Schools, and can teach the public about the full history of Black education in the United States, and how Black people were unwavering and able to educate and empower themselves independently. For more information on Rosenwald Schools in Virginia see: https://preservationvirginia.org/our-work/architectural-rosenwald-school-survey/.

Immediate plans for the Old Dawn School are to install a temporary tarp over the roof, and secure the building to prevent further deterioration from the weather.  More research needs to be done on the Old Dawn School and the community, but Morris would like to nominate the school for the National Register of Historic Places. It is hoped that all of the media attention will continue to raise awareness on the school so it can be preserved and successfully repurposed for the community.

If you want to make a donation to the Old Dawn School, go to our website donation page at https://preservationvirginia.org/support/donate/. Under “Gift Donation Option” select “Yes” and a window opens, which will allow you to name the honoree.  Type in “Old Dawn School” and we will know this is a designated gift for the school. If you are sending a check just write “Old Dawn School” in the memo line of your check. All gifts $60 and over qualify for membership to Preservation Virginia as well.