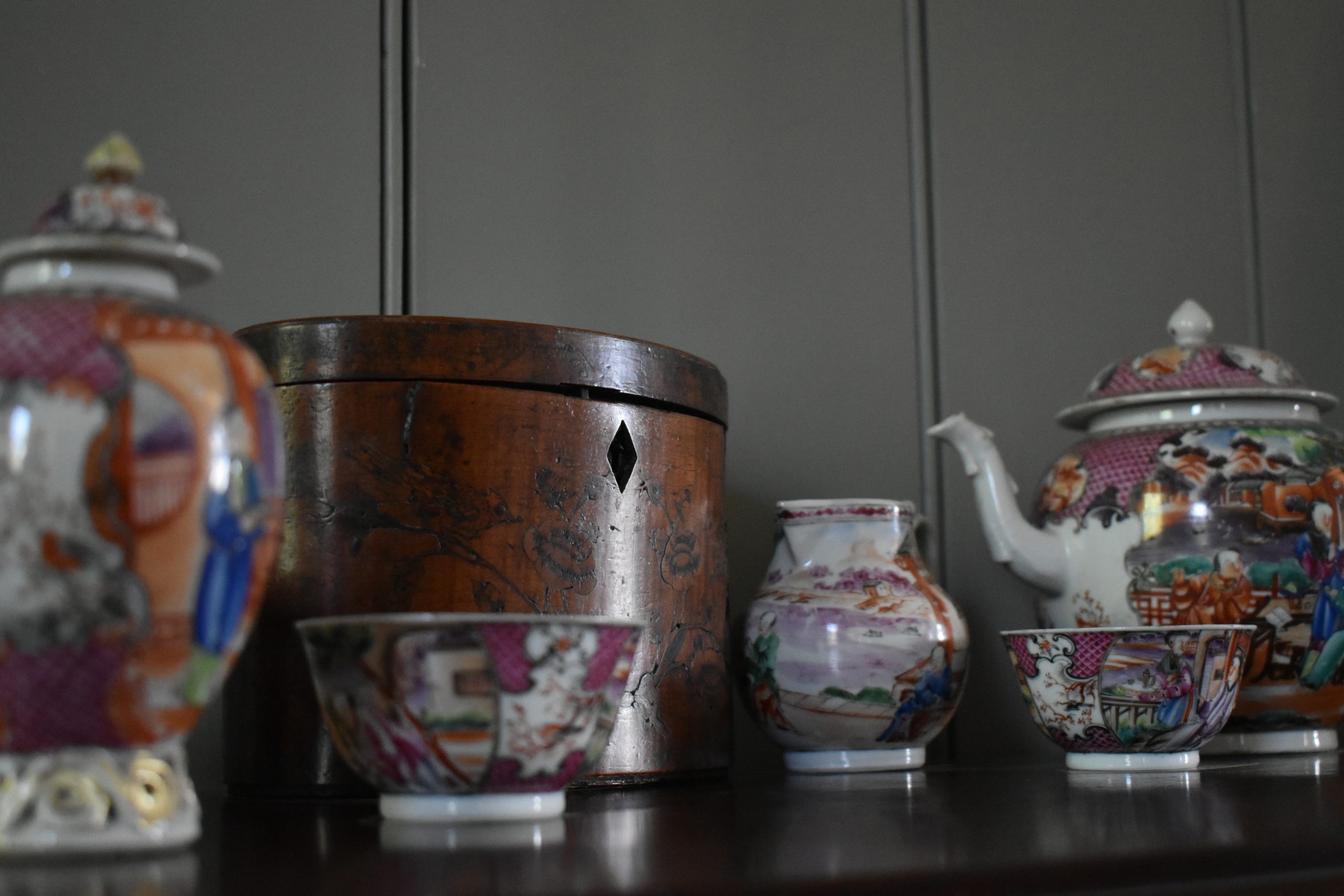 As a historic house museum, Patrick Henry’s Scotchtown has unique opportunities to study and explore the details of daily life, including foodways. While Virginia was still a colony of Great Britain, members of the Old Dominion’s upper class imitated the habits of their counterparts in the mother country. Among these was taking tea. Tea became available in the British Empire starting in the late 17th century, and by the 18th was a feature of daily life for those able to afford it. Not only was tea itself a valuable commodity, but so too was the equipage to serve it: fine porcelain pots, cups, saucers, and ornate wooden caddies all showed off their owners’ means and good taste to any guests at tea-time. Examining teatime at Scotchtown gives us an opportunity to examine the social conventions of 18th century Virginia.

For those able to afford tea, tea time served as a chance to demonstrate one’s social standing and hospitality. In addition to providing an opportunity to show off one’s fine tea accouterments, such as ceramics, caddies, and silver, it also allowed a hostess or host to show their generosity and largesse by sharing their valuable tea with their guests. In the first part of the 18th century, tea taking in colonial America would have closely resembled similar ceremonies in the mother country. The lady of the house would prepare and serve the tea to her guests both in the morning and at around 5 o’clock in the evening, a few hours after the main meal of the day at 2. After they had enough, the guests would turn their cup upside down and rest the spoon on the base, to spare the hostess the embarrassment of having an offered cup of tea declined. Although the Henry family is known to have been “uncommonly hospitable,” in the words of his brother-in-law Samuel Meredith, not everyone in the household would have participated in teatime. Young children were not invited; it was a minor rite of passage to be considered old enough to take tea. The enslaved also were not participants to tea time, although the task of cleaning up afterwards fell on their shoulders.

Tea drinking provides a window into some of the ways society in colonial Virginia was divided by class, gender, and race. Tea was a luxury, and that the Henry family had access to it is a sign of Patrick’s success and status. Although both men and women participated in tea-time, the honor of hosting the evening fell to the lady of the house, who prepared the tea and led the conversation. Finally, although life both inside the house and on the fields at Scotchtown and many other homes relied on the labor of the enslaved, their enslavers did not allow them to participate in the genteel ritual of tea drinking.

In Patrick Henry’s account book with John Syme, tea appears only once: in 1772, Patrick spends six shillings for a pound of green tea. This probably reflects the limits of this ledger, as he also buys teapots and other accouterments in 1774, which means he was probably buying tea elsewhere. Before the invention of tea bags in the 20th century, tea was brewed with loose leaves. A “slop bowl” for the loose dregs at the bottom of a cup of tea was an essential part of the tea set. Another important item was the tea caddy, which would store loose tea leaves (often under lock and key) until it was time to mix and prepare them.

Tea was a premium item, but it was not the only hot beverage available in colonial America. As tea gained popularity in the first half of the 18th century, coffee and drinking chocolate remained popular, if not as fashionable as tea. The Henry family also bought drinking chocolate in parcels of one or two pounds at regular increments.

Although tea might not have been on the menu every day at Scotchtown, it is clear from surviving heirlooms that the Henry family were avid participants in tea culture. One such heirloom is the tea caddy located in the dining room. Tradition has it that this object (dated to the 1780s) belonged to Patrick Henry’s mother, Sarah, in the twilight of her life. This box would have stored tea leaves with a lock on the front to keep such precious materials safe. Imported from England and decorated with veneers of exotic, brightly dyed wood, with silver foil lining its interior, this caddy not only protected the makings for delicious hot beverages, but also showed Sarah Winston Syme Henry’s good taste to her guests. Objects designed to show off their owner’s wealth and class were common in the homes of wealthier Virginians, and even Scotchtown, which was not lavishly decorated in Henry’s time, would have had the odd “splash of luxury” amongst the neat and plain furniture.

The language of 18th century tea culture may be unfamiliar to us, but although customs have changed, it’s easy to appreciate a cup of tea no matter what century it may be.