Vote for the 2018 Preservation Pitch Winner

The Preservation Pitch competition is an opportunity for community members statewide to pitch a historic preservation project for a chance to win $2,000 in seed money from Preservation Virginia. Three finalists have been chosen and now it’s your turn to choose the winner!

Please review the projects submitted by our finalists below and then visit Survey Monkey to cast a vote for your favorite by October 1. One vote is allowed per mobile or desktop device. Preservation Virginia will announce the winner on Facebook Live during the closing reception of the Virginia Preservation Conference October 19 in Danville. 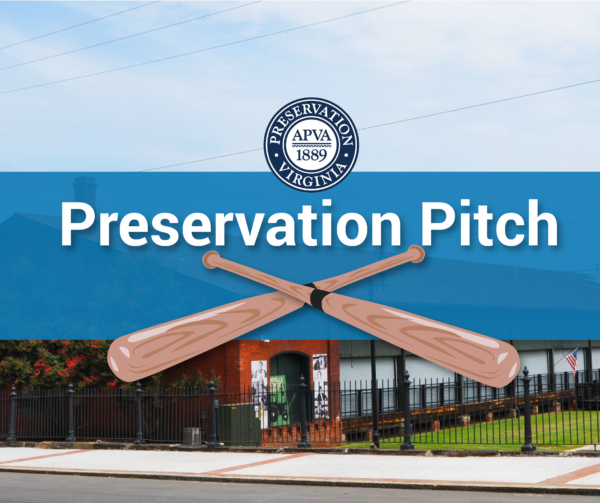 The Southside African American Cemetery Preservation Society was formed in 2014 to acquire, protect and interpret the Flippen Cemetery, an abandoned, historic cemetery located in a wooded area south of Old Mayfield Road in the Stokesland Community of Danville.

We are applying to the Preservation Pitch for funding to purchase and install a Virginia historical marker to memorialize the people buried in the cemetery and offer a small piece of history about the larger Post-Emancipation black community to help educate the public and raise awareness on saving the cemetery.

The Society has been attempting to acquire the cemetery since 2014. The goals for the cemetery include the clearing and cleaning of the cemetery, historic research, repair broken grave markers, interpretive kiosks, public educational tours or programs.

The Flippen Cemetery was abandoned and has been used as a trash dumping area for over fifty years. It is approximately one acre in size and contains over one-hundred graves. Most of the graves can be discerned as unmarked, sunken depressions; approximately twenty-five graves are marked with small, uninscribed fieldstones and at least twenty-four of the graves have inscribed markers. Much of the area was originally part of the Stokesland Plantation. Dates on some of the markers reveal that it was used soon after Emancipation. 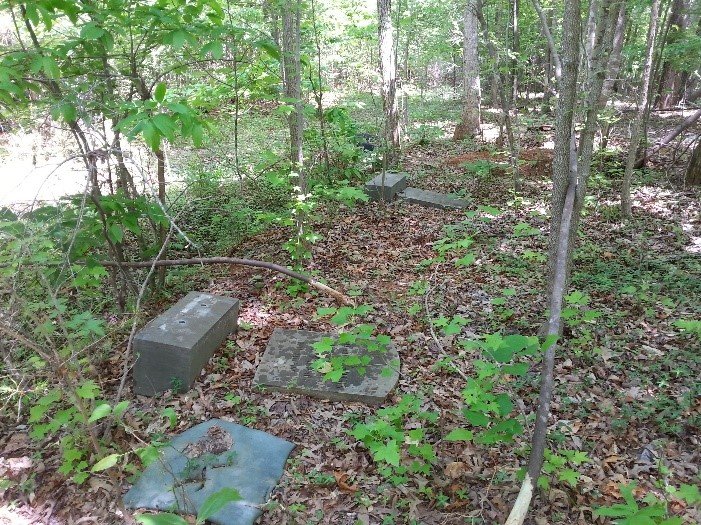 Pocahontas State Park near Richmond VA was originally built as the Swift Creek Recreation Demonstration Area by the Civilian Conservation Corps (CCC) in the 1930s as part of President Roosevelt’s plan to help the nation recover from the Great Depression.

There are six group cabin areas built around two central dining halls. Each group of cabins is comprised of about eight individual cabins with a larger lodge for the group activities. These cabins were built by the CCC as a way for groups such as Scouts, YMCA, churches, etc. to gain access to the outdoors. In fact, many of them are still used that way today. These are the only CCC built group cabins remaining in Virginia.

With over 100 buildings, Pocahontas has the largest number of CCC structures of any Virginia State Park listed on the National Historic Registry, and their limited budget hasn’t been able to keep up with maintenance. Some of the cabins have holes in the roof and siding; others need foundation work due to erosion. They require immediate stabilization.

Hence the creation of Cabin Work Week, resulting in 30-40 volunteers committing to a week of work in October to begin the process. Immediate needs are $15,000 for materials; however, we only have $5,000 committed.

Please select this project for the $2,000 grant. Don’t let the hard work of the CCC young men perish forever or our volunteers sit idle.

PS: Check out our video at: https://www.fopsp.org/ccc-cabin-preservation.html 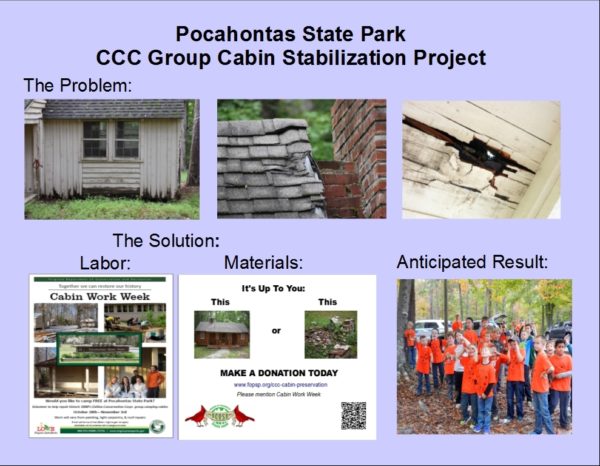 The Fairfield Foundation is dedicated to archaeology, preservation and education activities within Virginia’s Middle Peninsula and surrounding areas. The goal of this project is to research, identify, and promote the preservation of early 20th-century schools in Gloucester, Mathews, and Middlesex Counties. By researching and identifying these schools, we will learn more about the cultural and institutional history of education on Virginia’s Middle Peninsula, and can share these stories with the public. We will examine social space and landscape by studying the demographics of the region and its relation to segregation in rural schools.

We aim to locate, identify, and map school sites in the region, and to document current conditions of any remaining buildings using drone-based photogrammetry technology. We will then transform these images into highly detailed 3D models using the Agisoft PhotoScan program. The models will be available for the public to access on Sketchfab, the world’s largest online platform to publish, share, and discover 3D content on the web, and along with the locational map will be made available on our website.

Thanks for considering our research project for the Preservation Pitch competition!

Click the link below to vote for your favorite project by October 1.