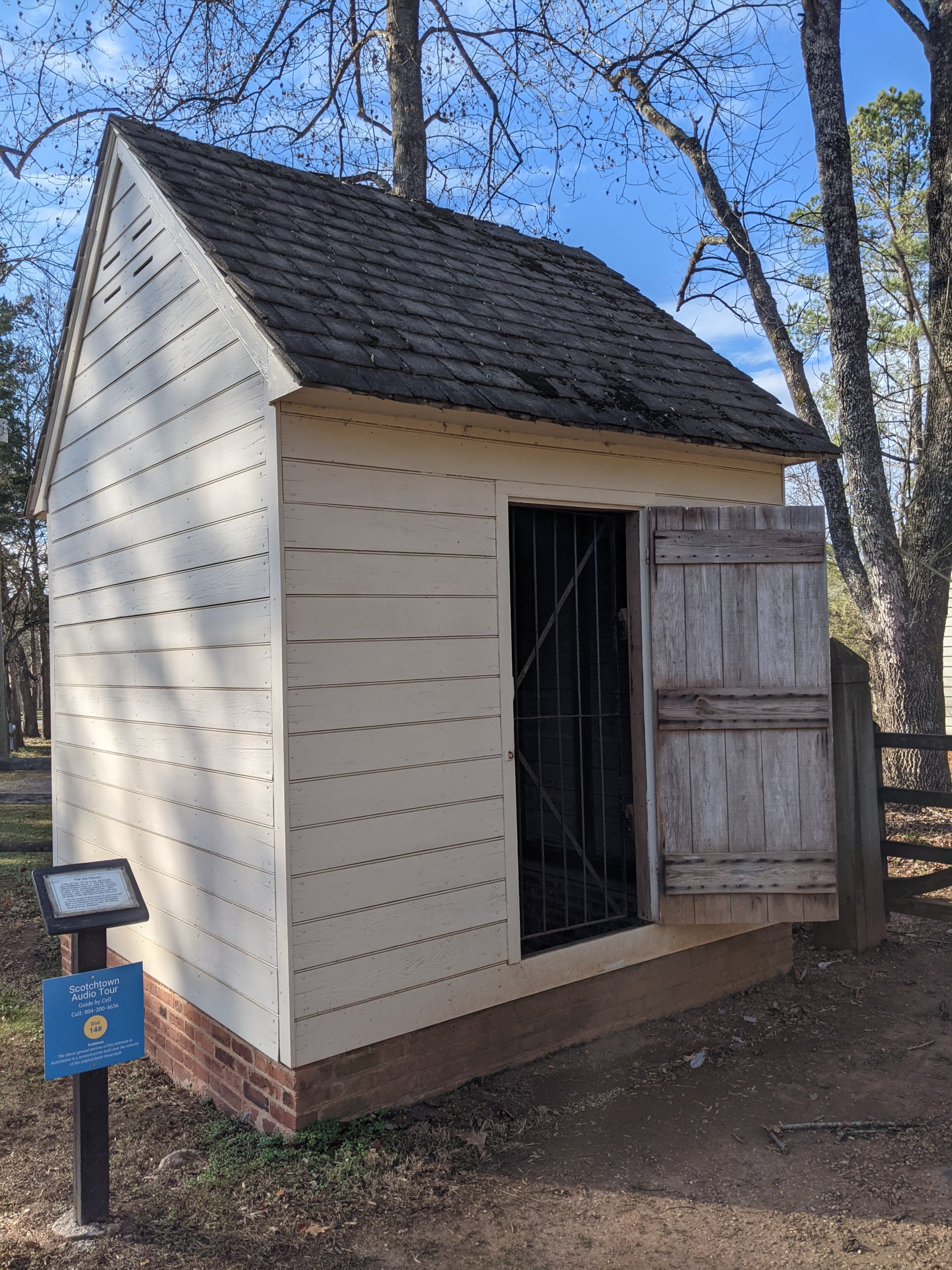 During the historic period, the main house at Scotchtown was supplemented by a variety of outbuildings. The ice house -one of the two outbuildings reconstructed today- is a remarkable satellite to a remarkable home, a symbol of the prestige and power of the home’s owners. To keep drinks chilled and creams iced in defiance of the heat of the Virginia summer was no easy feat, requiring both engineering expertise to create an environment that would successfully slow the melt of ice and enormous amounts of labor to harvest and pack the cool pit with a year’s provisions.

To begin, we must understand how an ice house works. Ice harvested during the deep freezes of winter would be stored in a brick-lined pit below the ground, where temperatures are lower. There, the ice would be insulated with straw and sawdust, further slowing the rate at which it melted. The best ice houses would have bottoms that drained into gravel or sand, allowing water that did melt to drain away. Properly kept ice houses could provide ice well into the fall. At Shirley Plantation on the James River, records show ice stores lasting from January until mid-November. Under less ideal conditions, ice would not keep as long. One winter at Mount Vernon, George Washington filled his ice house with snow, which was easier to get and pack down but much quicker to melt. Unfortunately for Washington, by June he was complaining in letters that it had all melted off.

The ice house at Scotchtown consists of a brick-lined shaft about 9 by 9 feet, and is around 30 feet deep. Most of the shaft is original but the upper portion and the wooden structure on top are reconstructed. Like most of the outbuildings, the bricks were likely made elsewhere on the property. It is not entirely clear where ice would have been sourced from, but the Newfound River is a likely candidate. Patrick Henry owned approximately 960 acres around Scotchtown, encompassing other water sources, though the Newfound River’s proximity makes it the probable candidate. Ice harvesting was difficult work. Enslaved laborers would carve blocks and extract them from the frozen rivers with hooks and clamps before transporting them by sled or by wagon to the ice house. Records from other homes suggest this could have taken many trips—one winter, Thomas Jefferson records that it took 62 wagonfuls of ice to fill the ice house at Monticello. At Shirley, the ice house was filled over nearly a month with about 20 tons of ice. The size and especially the depth of Scotchtown’s ice house suggests it would have been able to store an enormous amount of ice.

The stored ice was used in multiple ways. Typically, the ice itself was not used for drinks; rather, it would be put in some sort of receptacle or bucket and would be used to chill the bottles of the intended beverage you hoped to cool down. Aside from preventing watered down drinks, this also kept some of the unpalatable “seasonings” found in river or pond water from getting into the beverages.

Although refrigerators and freezers today are used to preserve meat and produce out of season, ice houses were not as likely to be used this way. Meat would be salted and smoked, and before the invention of canning at the turn of the 19th century, produce was typically preserved through pickling. Besides keeping drinks cool, ice houses also allowed hosts to serve frozen and chilled desserts to their guests.

Icehouses were instrumental in making a certain novel dish that will be quite familiar to readers today: ice cream. Ice cream was present in the colonies as early as 1744 and was a common sight on the tables of the wealthy elite. An early 19th century cookbook, Mary Randolph’s “The Virginia Housewife: Or Methodical Cook”, gives instructions for making ice cream that will likely be familiar to anyone who has made their own ice cream at home. A freezing-tub full of cream ingredients would be kept in a larger basin full of salt and ice and shaken until it had properly congealed. Methodical Cook gives recipes for several flavors of ice cream that run the gamut from familiar (chocolate, coffee, strawberry) to the less common in the modern day (quince, citron, and oyster). While it’s hard to know for certain what types of ice cream, if any, were served after suppers in the Henrys’ dining room, the presence of the ice house means it was certainly an option, along with sherbets and other frozen treats.

Documentary evidence on Scotchtown’s ice house is currently limited. It may have already been present when Patrick Henry moved into Scotchtown in 1771, or perhaps it was added during the seven years he owned the property. We do not know for certain what drinks Patrick may have chilled or what desserts he used the preserved ice to make. It is also unclear whether the stored ice lasted through November or gave out sooner due to weather, drainage, or improper insulation. But the brick-lined pit itself survives, and it tells us that Scotchtown included an ice house among its network of outbuildings. This simple structure serves as a tool to help tell the stories of Scotchtown’s inhabitants. An ice house was not a common sight: it was a symbol of immense wealth and power. Like every element of life on a plantation, the ice house depended on the labor of enslaved Africans as the backbreaking labor required to fill the ice house each winter. This would not be taken on by the landowners. Ice houses represent a rare luxury reserved for only the wealthiest colonists.

At Scotchtown, we invite you to visit and take a tour with our interpreters to learn more about the individuals whose stories intertwine with these spaces and landscapes.