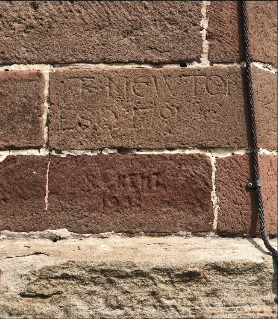 Many initials and names have been carved into the exterior of the Old Cape Henry Lighthouse throughout its 227 years. One of those, pictured above, is the only “official” name associated with the structure. T. Newton, or Colonel Thomas Newton, Jr., could be considered the “Father” of the Cape Henry Lighthouse. Who was he and what was his connection to one of the oldest lighthouses in the country?

Thomas Newton, Jr. was born in Norfolk, Virginia, on May 15, 1742, into a prominent family. His father was the mayor of Norfolk when Thomas was a young boy and Colonel Thomas Newton Jr. (so-called from his time in the militia), was heavily involved in the politics of Virginia before, during, and after the American Revolution.

His connection to the Cape Henry lighthouse began in 1772 when he was listed as one of the directors and managers in the “Act for Erecting a Lighthouse on Cape Henry,” passed by the Virginia General Assembly. Despite construction being halted during the American Revolution, Newton kept track of the materials and funds that were used and collected throughout the war. On August 7, 1789, the first Congress of the United States passed the Lighthouse Act, authorizing the United States government to take over existing lighthouses and to construct new ones. The Lighthouse Act also specified that a lighthouse be erected at the entrance to the Chesapeake Bay. After the passage of the Lighthouse Act, Colonel Newton wrote President Washington describing what had been done to construct a lighthouse at Cape Henry. Washington assigned Newton the duty of assessing and selecting the site for the lighthouse. At Newton’s recommendation to Governor Randolph of Virginia and President Washington, Virginia completed the “cession” of two acres of land at Cape Henry to the United States.

Construction of the Cape Henry Lighthouse began in 1791. During construction, Colonel Newton corresponded with Treasury Secretary Alexander Hamilton and other government officials on the problems encountered and the progress made by the builder, John McCombs, Jr. Newton praised McCombs for his work in these letters, especially for how quickly the work was progressing as he knew how necessary the structure was for vessels navigating the entrance of the Chesapeake Bay and for maritime trade and commerce in the region.

Colonel Thomas Newton, Jr. was well respected and his opinions often sought after and valued. As the lighthouse neared completion, the Assistant Secretary of the Treasury, Coxe, asked Colonel Newton for input on the men who had applied to be light-keepers. The first two light-keepers appointed by President Washington were recommended by Colonel Newton. Years later, when a problem arose with one of the light-keepers at Cape Henry, Newton wrote a letter to Albert Gallatin, the Secretary of Treasury under President Jefferson, recommending replacing the lighthouse keeper. The response from President Jefferson was “that the opinion of Colonel Newton is of sufficient authority for the removal of the present keeper.”

Colonel Thomas Newton, Jr. died on September 11, 1807. While there is no grave marked for him, he was likely buried in the vicinity of the Old Custom House in Norfolk. His contribution to the construction of the lighthouse, his recommendations for where the lighthouse be built and for the men who would keep the light, highlight his important role. Given his involvement, he could certainly be called the “Father of the Old Cape Henry Lighthouse.”

Signature from the exterior of the Cape Henry Lighthouse. Image by Historic Interpreter Billy Simmons.