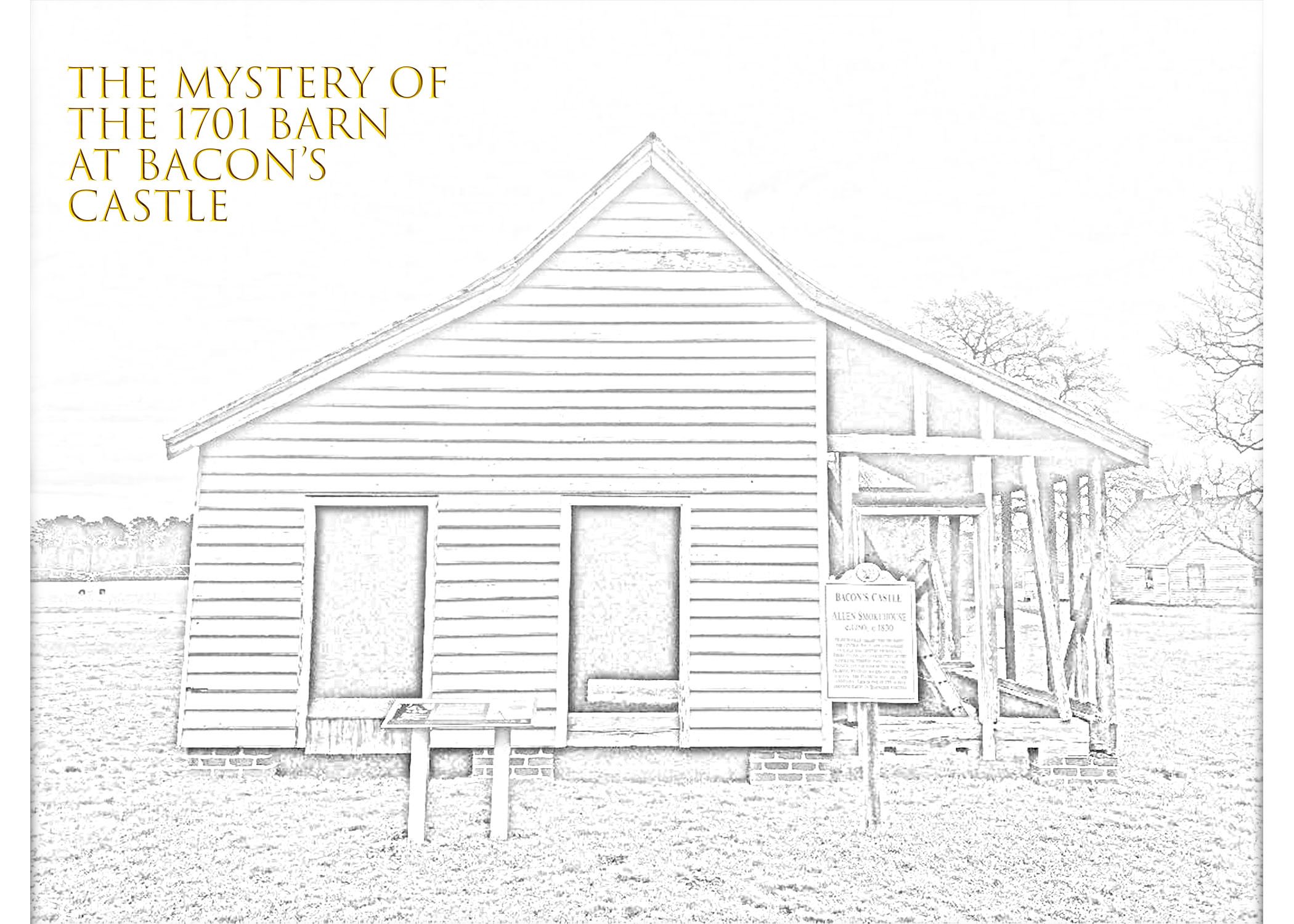 In the seventeenth and eighteenth centuries, the landscape around Bacon’s castle was filled with outbuildings that supported the domestic and agricultural functions of a working plantation.  These buildings were generally small, single use structures that were primarily occupied and worked in by the enslaved population. From documentary and archeological evidence we know that a kitchen, dairy, still house and mill once stood on the grounds surrounding Bacon’s Castle. In addition to these structures there almost certainly existed many more outbuildings common to grand Chesapeake plantations including slave dwellings, tobacco barns, storehouses, granaries, privies, smokehouses and overseer’s quarters.

Today, only one pre-nineteenth-century outbuilding is still extant at Bacon’s Castle. Situated behind the manor house stands a three room, timber-framed outbuilding that by today’s standards would be described as a small barn. What the building was used for originally though, remains a mystery. Very little documentary evidence on the building survives so the architecture itself offers the most information about the original function.  The building has a taller, gable-roofed center section flanked by a shed- roof sections on either side. Each section of the building is partitioned and accessible only from individual exterior doors. The center-section and rear-shed section were constructed together in the eighteenth century, while the shed on the front was added as a later addition in the nineteenth century. 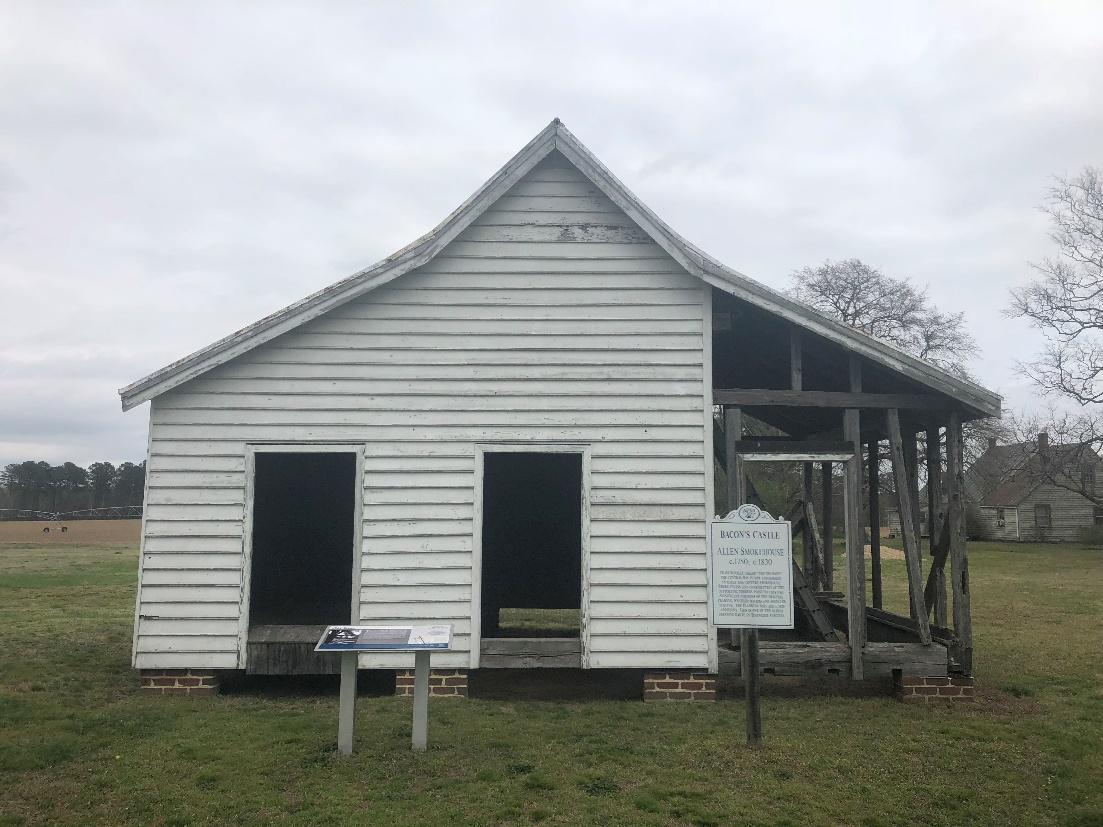 West elevation of the barn. The center and left bays are the original, eighteenth-century sections of the building. The un-enclosed section on the right was added later, sometime in the 19th century.

Looking at the original section of the building, a few features offer some insight to how the building might have been used. A wood floor, closely studded framing, and tightly fitted weatherboard siding suggest that the building may have been used to store goods, likely agricultural products like corn or wheat. The close stud spacing may have been employed to help the building hold heavy loads of material, or provide extra security from theft. The extra framing would certainly provide more nailing surfaces so that siding could be fastened extra tight against moisture, insects and animals. The building originally had wood floors (not a given in eighteenth-century outbuildings) which makes sense if you wanted to keep goods protected and off of the ground. 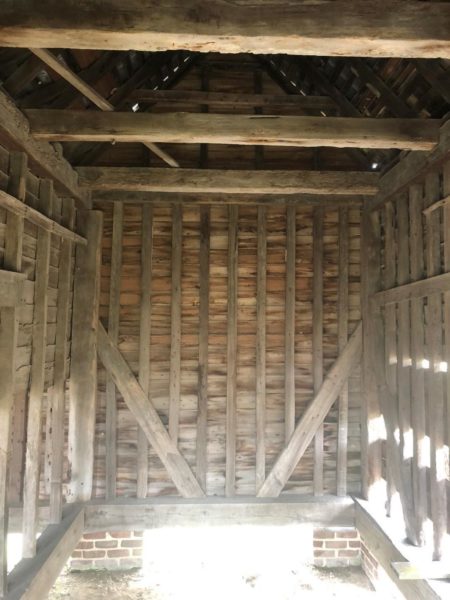 Interior view of the central bay. Note the closely spaced suds on the exterior walls compared to the partition wall studs to the left.

Architecturally, the building has a few more interesting features that offer insights to the original use.   The nineteenth-century shed addition off the front was constructed on top of the originally-exterior center section.  This has preserved several courses of original round-butt cypress shingles, an in-tact beaded cornice, and a large section of original beaded weatherboards.  The use of a molded cornice and siding suggests that the building had a higher importance than lower-tier outbuildings which would likely eschew any decorative expenditures.  Inside the building, the partition between the original center and rear section is sided with beaded weatherboards, similar to those on the front. The boards are covered with scratched-on tally marks where the application of a beaded edge left a smooth surface on the siding.  While it is unknown when the marks were inscribed, they offer tantalizing imagery of how people were once using and interacting with the structure.

Shingles that were preserved when the nineteenth-century shed was installed over the existing roofline. 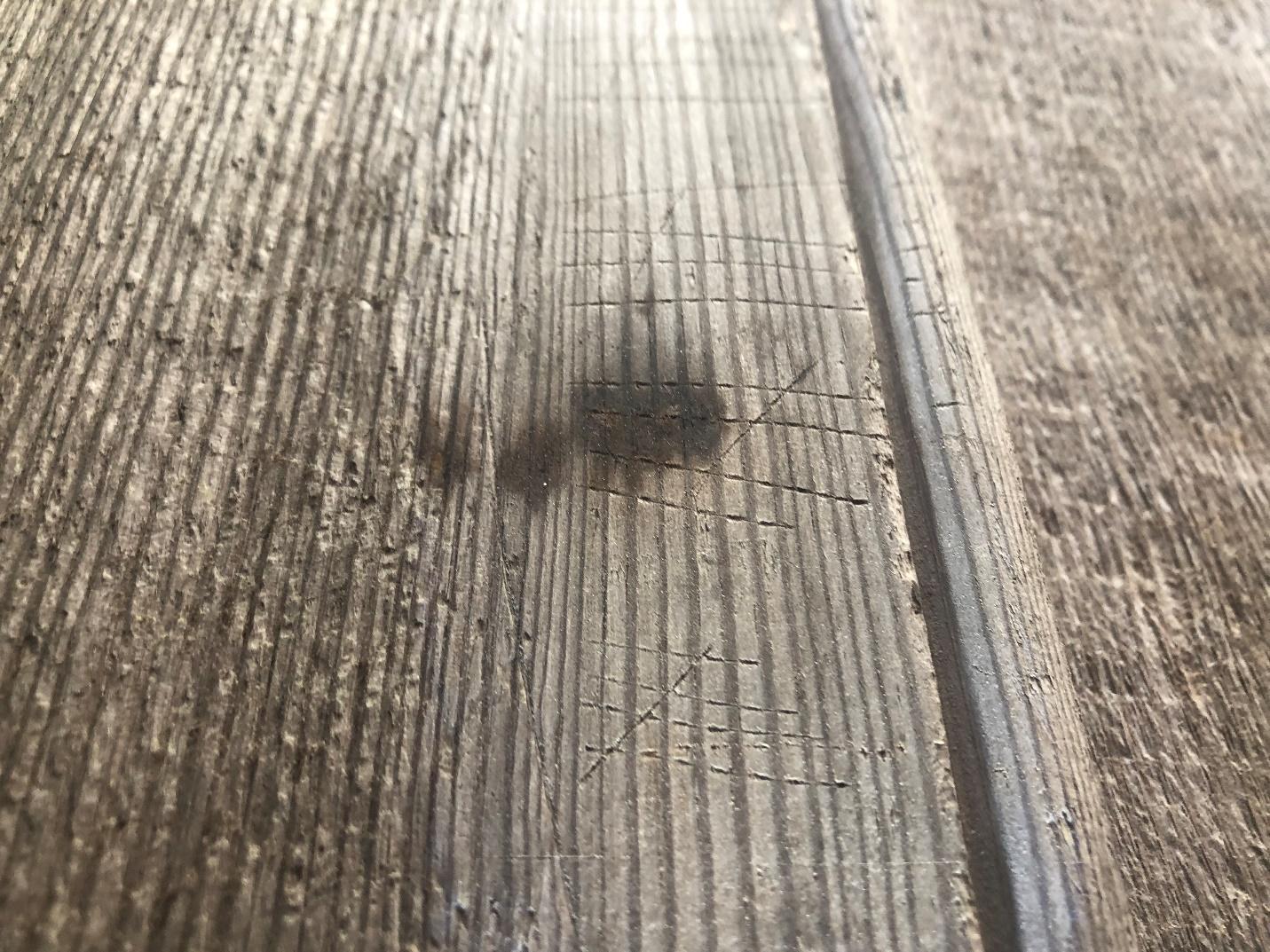 Tally marks scratched into the partition wall between the center and rear section of the barn.  The marks are concentrated on the sections of board that were planed smooth when adding bead along the lower edge.

Even with these fantastic features preserved, the building has not escaped damage and decay from environmental exposure.  All the doors are missing, and some of the original framing has been damaged from moisture and termites. The nineteenth-century shed addition has no siding, and as a result much of the framing has deteriorated. Preservation Virginia is currently preparing to address these issues by stabilizing the framing, replacing the doors, and adding new siding.  As we work to preserve the building we are hoping more architectural insights will help us solve the mystery of the building’s original function.

To help preserve this and other structures at Bacon’s Castle, we received a $300,000 challenge grant from The Cabell Foundation in Richmond. We need to match the full $300,000 by November 30th to receive the grant. We’re well on our way, but we need your help to reach our goal. If you care about the 1701 barn, Bacon’s Castle and all the properties owned and opened to the public by Preservation Virginia, please consider making a gift online today!