Aside from the long and colorful history of Smith’s Fort Plantation, the manor house is also home to a fine collection of seventeenth and eighteenth century material culture. House museums like ours by definition attempt to recreate and interpret the lifestyle of the people who lived there during a particular time period. In this case the period is mid to late eighteenth century, a time when a middle class in Virginia began to expand more rapidly and revolution against the British Empire was on the horizon.

Our museum was the home of Jacob Faulcon, a successful Virginia tobacco planter, merchant and patriot. His success in Surry is not only displayed in the design of his simple yet elegant four room manor house, but also in the possessions he attained during his life that appeared in the probate inventory upon his death in 1801. Although not originally owned by Mr. Faulcon, on display in the first floor bed chamber of the manor house is a pair of finely crafted and intricately carved side chairs that he would have been proud to have used to seat guests around his table. They are made of cherry and were thought for many years to have been produced in Williamsburg from the shop of Anthony Hay. These two chairs are part of a set of at least twelve believed to have descended in the family of John Waller (1753-1809) who was the Clerk of the Court for Spotsylvania County from 1774 until 1786. They have been part of our collection since 1949 and are exemplary of some of the fine furniture being produced in eastern Virginia in the late eighteenth century. 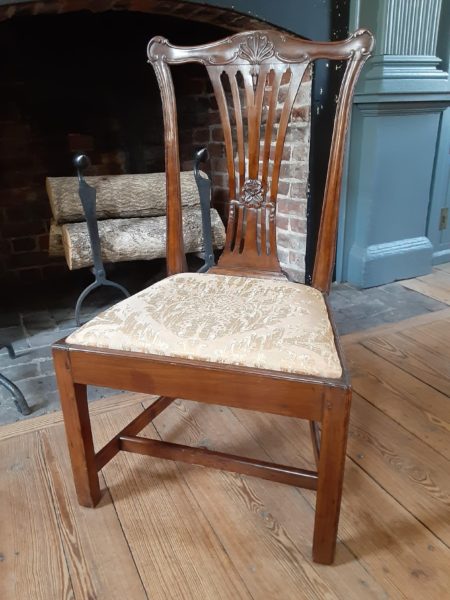 After tobacco inspection began in Fredericksburg in 1730, the surrounding area and Northern Neck became more of a center for contemporary style and culture, much like Williamsburg did after it became Virginia’s capital in 1699. As Fredericksburg grew and wealth concentrated, there was demand for fine furniture, some of which was imported but much was produced locally. In the last decades a lot of progress has been made in correctly identifying the work of specific artisans working in this region. Colonial Williamsburg’s Curator of Furniture, Tara Chicirda, observes “many significant pieces of furniture once attributed to Williamsburg can now be assigned to Fredericksburg makers based on documentary sources, family histories, style and construction.” Chicirda’s extensive research on this topic was published in a 2006 article in American Furniture, accessible for free at this link.

Chicirda has revealed that one of the principle cabinetmakers operating in the Fredericksburg area during the 1770s and 1780s was Thomas Miller. Born in Stirling, Scotland, Thomas probably trained in the trade in his homeland. He immigrated to Virginia around 1768 with his older brother John. Advertisements posted in the Virginia Gazette and records from Masonic Lodge #4 of Fredericksburg place Thomas Miller in the area working in the trade beginning in the 1770s. Thomas and his brother John were both members of Lodge #4 in Fredericksburg, sponsored by the Grand Lodge of Scotland in 1752, and lodge records show the purchase of two chairs, one made by James Allanach, also a Scotsman in 1753, and one made by Thomas Miller in 1773 or 1774, probably to replace the one Allanach built since it was twenty years old at that point and simply out style as well. These records provide good information about local patronage and the production of fine furniture in the area.

This chair would have belonged to the Master of the lodge complete with fine traditional carvings of the square and compass and some neoclassical motifs that would not have been en vogue when Allanach made his chair for the lodge in 1753. The construction of this fine surviving Masonic armchair is strikingly similar to that of an armchair in the collection of Colonial Williamsburg (follow this link to compare). The dovetails where the arms join the rear stiles are almost identical, and there are other similarities as well. Our two side chairs at the manor house are from the same set as the armchair in the Colonial Williamsburg collection This is exhibited best by the intricate carving on the splats and the anthemions in the center of the crest rails. 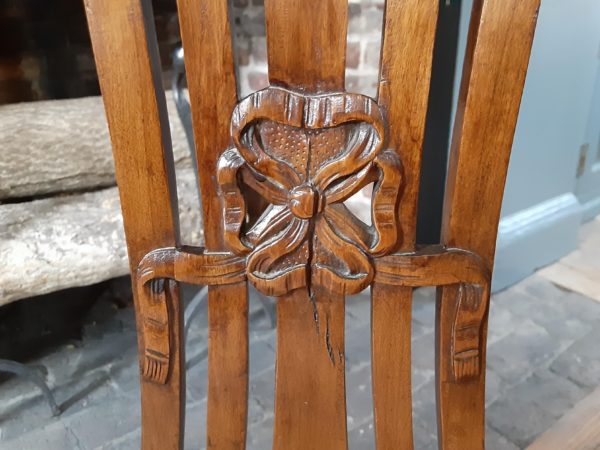 Often furniture makers produced architectural pieces as well when commissions were slow, and although there are no documents to confirm this about the shop of Thomas Miller, some architectural pieces in progress were listed in his probate inventory in 1802. Two homes in Fredericksburg are known to have mantel carvings and chimneypieces by the same artisan that carved the latter Lodge #4 chair. One of these homes is Kenmore, built by Fielding Lewis in 1774 or 1775. The five petal flower appliques on one of the chimney pieces at Kenmore are the same neoclassical design found on the seat rail of the Lodge #4 chair, and appear to be by the same carver. Also the anthemions on the crest rails of the Waller chairs are identical to the intricate carvings on the mantel trusses in one of the dining rooms at Kenmore, which is located just one block down Caroline Street in Fredericksburg, from where Thomas Miller’s shop stood. Fielding Lewis was also a member of Masonic Lodge #4 where Thomas and his brother John were members. He certainly would have been familiar with Miller’s work and likely commissioned the work near the completion of the home. The carvings on the mantel trusses and those on the crest rails of the Waller chairs are clearly by the same hand. 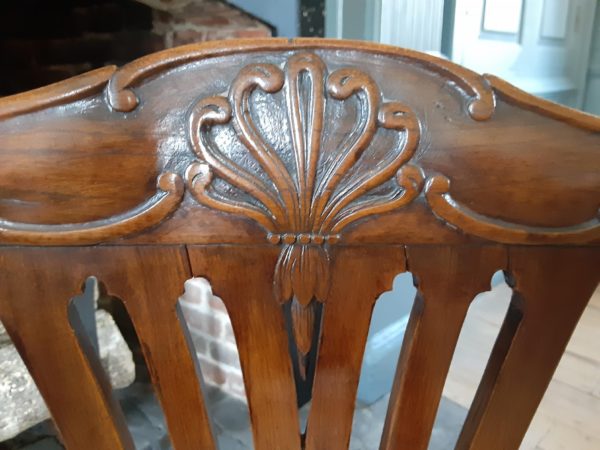 The side chairs in our collection are two of the four that were bequeathed to the Association for the Preservation of Virginia Antiquities in 1949 by Miss Gabriella Page. Two of these four chairs now reside in the collection of the Museum of Early Southern Decorative Arts in Winston Salem, North Carolina, and another one of the set, according to oral history, descended through the Thorton family of Fall Hill, not far from Fredericksburg. It is ironic to note that the two side chairs we have, made for John Waller, Clerk of the Court for Spotsylvania County are now being proudly displayed in the home of home of Jacob Faulcon, who served as the Clerk of the Court for Surry County in the late eighteenth century as well. Come and see these beautiful chairs and other treasures close up when we reopen!

To learn more about Thomas Miller, be sure to check out this article: