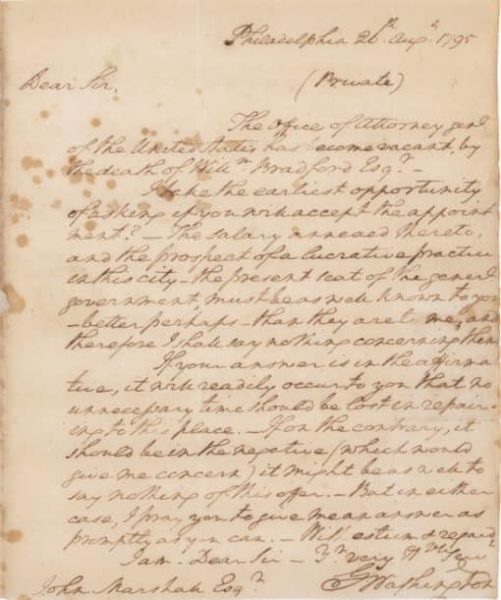 On August 26, 1795, President George Washington found himself in need of an Attorney General of the United States to serve within his administration. Eager to fill the vacancy with his first-choice candidate, Washington took “the earliest opportunity” to offer the office of Attorney General to John Marshall. Marshall received Washington’s letter at a time in his life when he was more focused on promoting Federalism within Virginia, expanding his local career and supporting his family in Richmond, as well as accumulating his own personal wealth. So, the future Chief Justice turned down President Washington’s invitation. Saddened by Marshall’s decision, Washington wrote to Alexander Hamilton that “Mr. Marshall, of Virginia, has declined the office of Attorney General, and I am pretty certain he would accept of no other.”
A significant year for John Marshall, 1795 presented him with several compelling reasons to deny the nation’s first President—a man Marshall greatly admired—in his generous offer of Attorney General. That year, Marshall had been elected to the Virginia House of Delegates in which he championed Federalism as well as George Washington’s administration. Though a staunch supporter of the President and his Federalist ideology, perhaps Marshall believed continuing to serve at the state level would permit him to better advocate for Federalism amongst his statesmen than actually serving within the federal government itself. Marshall proclaimed in his biographies of George Washington that “the real danger which threatened the republic was to be looked for in the undue ascendancy of the states.” Federalists like Marshall believed that a strong, central government was better equipped to protect the liberties for which he and his fellow countrymen had fought.
Moreover, in addition to debating the merits of Federalism on the floor of the legislature in 1795, Marshall also dedicated his time and attention to debating the constitutionality of the controversial Jay Treaty, further inspiring him to decline the Attorney Generalship. Proposed as a resolution to idling concerns from the Treaty of Paris (1783) which ended the American War for Independence, the Jay Treaty forged trade agreements between the United States and Great Britain. A skilled orator, John Marshall argued for the Treaty’s constitutionality and he went to fence with opponents of the treaty like Thomas Jefferson, who saw it as an unconstitutional document which aided the British more than the United States.
In addition to Marshall’s preference to remain in the Virginia legislature rather than to join Washington’s administration as Attorney General in 1795, Marshall also sought to expand his private law practice in Richmond, as well as his personal property holdings. By the time Washington penned his August 26th letter offering the position, Marshall was in the process of making a large land purchase in the Northern Neck of Virginia. Eager to obtain the tract of land—which incidentally existed at the forefront of one of Marshall’s victorious cases years earlier, Hite v. Fairfax (1786)—and cognizant of a growing legal dispute over the property, Washington’s offer of Attorney General worried Marshall that a position within the federal government may further dirty the muddied waters surrounding the legal proceedings for the land purchase. Wanting to maintain a lower public profile, the desire for the Fairfax property contributed to Marshall’s rejection of Washington’s offer.
Ultimately, despite their close relationship, Marshall did not serve in George Washington’s administration, but in the years to come, John Marshall went on to serve and represent the United States in other prestigious capacities at home and abroad. To learn more about the Great Chief Justice John Marshall, come visit his home for a closed-group private tour Friday-Sunday.
category: