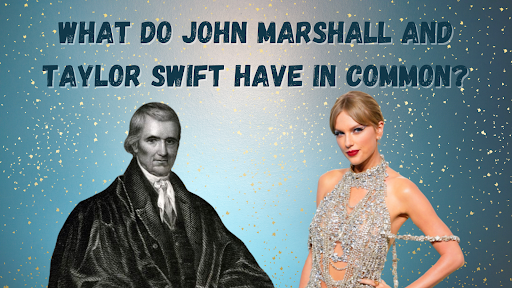 What do John Marshall and Taylor Swift have in common? Well, we’re glad you asked.

Whether or not you’ve been a Swiftie since she debuted her first album in 2006, you’ve no doubt heard about Taylor Swift’s new album, Midnights, her upcoming Eras tour, and the digital stampede that took place on TicketMaster.com of fans seeking tickets earlier this week.

In similar fashion, you’ve also no doubt heard of one of John Marshall’s most significant court decisions delivered toward the end of his tenure as the longest-serving Supreme Court Chief Justice in 1824: Gibbons v. Ogden. This nail-biter of a case created a precedent about interstate trade, commerce, and you guessed it: economic monopolies. In the Gibbons decision, Marshall heard from two private steamboat enterprises, each operating in New York and New Jersey; the New York owner attempted to create a steamboat trading monopoly within his state. The state of New York insisted it was their right to permit the monopoly, but Marshall used the Constitution’s Commerce Clause to argue that it was the federal government’s jurisdiction to regulate interstate commerce, not the states themselves. Once again, Marshall weighed in on a state’s rights versus federal government debate, and Marshall sided heavily with the latter, adding yet another decision to his 30-year agenda to expand the power of the federal government.

In a Tweet earlier this week, Representative Alexandria Ocasio-Cortez reminded us that the event company, Ticketmaster–which failed to keep up with the unprecedented demand for presale Taylor Swift concert tickets–has been a monopoly since merging with competitor, Live Nation, in 2010. “Break them up,” AOC said. In response to the merger, the New York Times added that “the resulting company would become an industry colossus, one that had too much power and was capable of crippling competitors in the ticketing business.” When Ticketmaster and Live Nation merged over a decade ago, they gained control of over 70% of concert ticket sales in the U.S.

While Taylor Swift is surely in appreciative awe at the 2.4 million people who have purchased tickets for her upcoming tour, Chief Justice Marshall would not be as impressed with the monopoly behind the tickets. Given the precedent that Marshall’s 1824 Gibbons decision set, it’s even more interesting to consider that it was the Justice Department that even permitted Ticketmaster and Live Nation to merge in 2010 in U.S. and Plaintiff States v. Ticketmaster Entertainment, Inc. and Live Nation Entertainment, Inc.

According to the New York Times, when the DOJ approved the joining of these two companies, they mandated an antitrust consent decree amongst the parties to prevent Ticketmaster from pressuring venues to use Live Nation for concert tickets–a consent that was deemed violated and subsequently investigated in 2019. “Ticketmaster’s power in the primary ticket market insulates it from the competitive pressures that typically push companies to innovate and improve their services,” wrote Senator Amy Klobuchar. “That can result in the types of dramatic service failures we saw this week, where consumers are the ones that pay the price.”

Perhaps if there had been a comparable competitor also selling Eras tickets, the boom and bust that millions of users experienced on Ticketmaster’s website this week could have been avoided. Ticketmaster is the subject of much scrutiny right now, both internally and externally, and is apparently self-investigating to prevent the Taylor Swift ticket surge that took place from happening again.

Even though Chief Justice John Marshall found monopolies as “repugnant to the Constitution,” surely he would find Taylor Swift’s chart-exploding 10th album, Midnights, anything but. Now, most importantly, which song do you think Marshall would like most?